A unique initiative for Christmas season 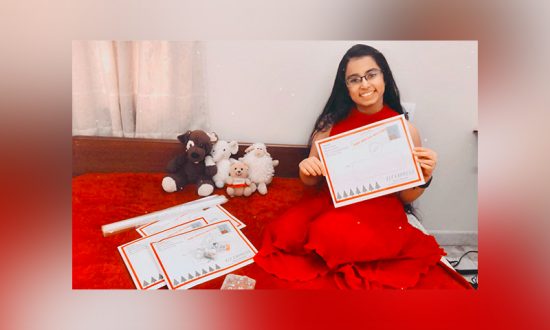 Christmas is a season when children indulge in fun and frolic, but Canadian International School’s (CIS) Grade 9 student, Sanskriti not only wants to have fun, she wants to spend her time giving back to the community as well through her initiative “Etched by Santa”. Fourteen-year-old Sanskriti has initiated a fundraiser for the protection of stray dogs and is creating surprising gifts to parents and children who support her campaign.

The funds will be given to the Animal Rights Fund Rescue Center, in Kengeri. The shelter that she’s raising funds for has over 200 dogs and many of them have a variety of medical needs including tumors, injuries from road accidents, abandoned, or are blind and aged. Sanskriti’s plan is to help most of them, if not all, depending on the extent of funds she is able to raise through Etched by Santa.

Commenting on her initiative, Sanskriti said: “The reason I started this fundraiser (‘Etched by Santa’) was that I always come across injured street dogs that are deprived of food, medical care and love. It’s heartbreaking to watch them scour for bits of food even when they’re hurt. A personal experience that motivated me to start this noble initiative was when there were few abandoned kittens near my house. I tried to feed and care for them, but unfortunately, two of them ran away and one kitten passed away. This experience was extremely painful and made me realize how many stray animals are out there, silently crying for help.”

“Fundraising for an animal shelter isn’t easy, and coming up with effective ideas to fundraise can be difficult. I chose the idea of making Santa letters and certificates because it’s the Christmas season and Santa always spreads cheer around the world! He inspires and encourages children to be empathetic, kind, and generous. My goal is to raise awareness about animal adoption and raise as much money as possible for donation through Etched by Santa. The money raised will be used for the care of animals, food, bedding, supplies and medical assistance at the animal shelter.” added Sanskriti.

In addition to Sanskriti’s serious task of fundraising, in keeping with the spirit of the season, she will send personalised letters from Santa to parents and children. Once someone contributes to the fundraiser, she asks them a few questions to collect some personal and fun information. Then she sends them a package with an authentic personalised letter, a special postmarked envelope from the North Pole, a naughty/nice list certificate and a small gift.  Many people have asked her if they could prank their friends with an adult naughty/nice list and Sanskriti is more than happy to do that. All this is mailed to them against a donation of Rs 350.

Commenting on Sanskriti’s initiative, Ms. Shweta Sastri, Managing Director, Canadian International School said: “Sanskriti’s work will spread cheer among children and encourage them to be empathetic, kind and generous. The fundraiser will show people the importance of animal adoption and compassion. I congratulate her on her effort and I am sure many students will be inspired by Sanskriti and join her in her wonderful endeavour.”

Sanskriti plans to do a similar fundraiser called Etched by Tooth Fairy too and based on the results of this fundraising initiative, she plans to launch many such drives in the future.

If you wish to donate to Sanskriti’s fundraiser, send a Whatsapp message to her mother Shilpa Sanjay on Ph: 7349693999. The fundraiser’s handle on social media is @etched_by_santa.