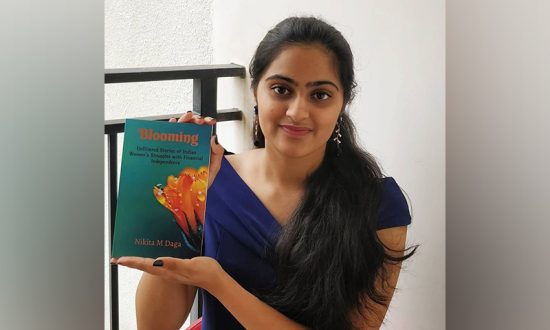 In keeping with the high intellectual traditions of the Canadian International School, its IB2 (Grade12) student Nikita has just published her book, ‘Blooming: Unfiltered Stories of Indian Women’s Struggles with Financial Independence’, a non-fiction work highlighting women’s struggles to attain financial independence. The book uncovers the suppressed feelings of common Indian women and redefines financial independence to encompass issues going beyond monetary limitations. Discussions in the book are founded on the raw stories of real Indian women from across 12 states who volunteered with their experiences with hopes of highlighting the struggles of numerous other women like themselves. With conversations about gender roles, education, marriage, inheritance, workplaces, etc, the book delves into multiple constraints for women.

Nikita who explains what prompted her to write the book, said: “I am passionate about understanding the influential factors that restrict women’s financial independence. In many families, the women don’t work but men do. I wanted to understand the effects of this gender gap in a larger way. In the course of my research, I came across vast quantitative data, but I was inspired more by the qualitative stories that backed the numbers up. I am volunteering with Florence, an app that focuses on increasing loan funding to women. Their initiative is enhancing financial independence of women to further empower and support them in start-up initiatives. I am interested in continuing advocacy on women’s financial literacy and independence with them.”

Nikita has helped with marketing and also hosted workshops for their applicants and customers on financial literacy at Florence. Nikita has been researching financial literacy on her own, and she took an online course from Penn State, which helped her build the modules for her workshops. Nikita then modified the modules to meet the needs of Indian women she was working with.

Commenting on Nikita’s initiative, Ms. Shweta Sastri, Managing Director, Canadian International School, Bangalore said: “Trying to understand issues around the financial independence of women is a huge task. I deeply appreciate Nikita for publishing a book on this very critical area particularly in India, where women face hurdles in achieving their dreams. Lot more research on the area is required and I hope Nikita would pursue this further and other students join her in her venture.”

Nikita hopes that this book will serve as a source of inspiration for young girls and women, sensitize society to the struggles of women, while also bringing to attention an immediate need for reform. Nikita has also published a research paper on the subject in an international journal recently.