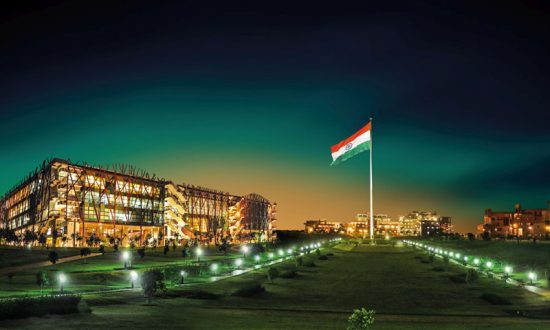 Haryana-based O.P. Jindal Global University (JGU) has become the youngest and the only new Indian university to break into top 1000 in the prestigious Quacquarelli Symonds (QS) World University Rankings. The QS global rankings 2020 were released on 19th June in London. Out of 50 new entrants globally, JGU is the youngest university which has achieved this distinction. In the university’s tenth year of existence, JGU is now placed amongst the top 2.67% of all universities globally.

Out of more than 28,000 universities in the world, only top 1001 were ranked by QS in terms of their performance criteria. JGU has become the only Indian university in the QS world rankings which is mainly focused on social sciences and humanities. Historically, university rankings have favoured universities that are oriented towards Science, Technology, Engineering, Mathematics (STEM) disciplines and Medicine. However, JGU is the only Indian university to challenge this tradition solely focusing on social sciences, arts, humanities and professions such as law, business administration and architecture.

Welcoming this development, philanthropist, Mr. Naveen Jindal, Founding Chancellor of JGU said: “JGU’s maiden entry into the QS World University Rankings 2020 is a phenomenal achievement as we celebrate our 10th anniversary. When we established the university in 2009 in memory of my father, Mr. O.P. Jindal, the vision was clearly to build a world class university in India. This global recognition for JGU is a testament to the power of private philanthropy in the higher education arena. It goes to show that a private university doing excellent work can become a world-class university. My congratulations to the leadership, students, faculty and staff of JGU.”

Professor (Dr.) C. Raj Kumar, Founding Vice-Chancellor of JGU remarked, “This is an extraordinary international recognition for a university which is barely a decade old. Our commitment to maintaining the highest standards of excellence since our founding has helped us achieve this distinction. I would like to thank our benefactor and founding Chancellor, Mr. Naveen Jindal for this generosity and magnanimity in building a university that is deeply committed to excellence and public service.”

Professor Kumar while tracing the journey of JGU’s entry into the global rankings said, “In September 2017, we first broke into the QS BRICS University Rankings. We then set up the Office of Rankings, Benchmarking and Institutional Transformation (ORBIT) under the leadership of Prof. (Dr.) Ashish Bharadwaj (Dean, Jindal School of Banking and Finance) and Prof. Arjya B. Majumdar (Director, Office of Academic Planning, Inter-disciplinarity and Coordination) to analyse the methodologies of rankings. In 2018, we broke into the QS Asia University Rankings and have continued to show exemplary performance this year by breaking into QS world top 800. We will dedicate ourselves to the efforts to build a world class university.”

Reacting to this development, Registrar, JGU, Prof. Y.S.R. Murthy said, “JGU has been strongly committed to internationalization and inter-disciplinarity, among other things. This achievement has been made possible through extraordinary determination and strong commitment by all members of JGU community to promote excellence. This recognition will motivate us in our efforts to transform the higher education landscape further by expanding the range of educational opportunities to our youth and contribute to nation-building. I wish to thank the top leadership of the JGU, staff, parents and students for the long strides made in a short span of a decade. I also wish to acknowledge the support and encouragement received from the Haryana Government, Ministry of Human Resource Development, UGC, Bar Council of India and other Regulatory bodies in our efforts.”

Professor Dr. Ashish Bharadwaj, Dean, Jindal School of Banking and Finance and Executive Director of ORBIT said “It is a very significant achievement for a young social science university. While in the last few years, several older colleges and institutes, particularly in France, Finland and elsewhere in Europe have recently merged to form new universities, JGU or any of its constituent schools did not exist in any form prior to 2009, making JGU the youngest university in the world to break into the latest edition of QS World University Rankings 2020. It is time we move past the historic prejudice against private universities in India.”

Professor Arjya B. Majumdar, Executive Director of ORBIT commented that “We’re really excited that JGU was able to break into the QS WUR and it is indicative of the quality of our faculty, the work that we do and our reputation globally. We should, of course, be mindful that rankings are but a tool to determine excellence-a means to an end and not the end itself. We hope to continue the journey in the pursuit of excellence.”

Mr. Ashwin Fernandes, Regional Director – MENA & South Asia, QS Quacquarelli Symonds said “It is moment of pride for India, as one of its youngest universities – O P Jindal Global University, has made a remarkable entry into the global league tables with the launch of the 2020 edition of QS World University Rankings. I am elated to see that an institution which celebrates its tenth anniversary this year, has put wheels in motion in its early days to aspire to be world-class, and rankings are merely a tool which captures such achievement.” He added that “to be amongst the 23 Indian universities to be ranked this year, out of the 1000 which are ranked globally, clearly makes a statement that with the right mix of leadership, faculty, infrastructure – and most importantly ‘determination’ that we can have many more Indian universities featuring in global rankings in the future”.

The QS WUR is relied upon by millions of students annually to make higher education and admissions-related decisions. The rankings are based on a combination of parameters including research output and impact, academic and industry reputation, faculty-student ratio and internationalization.