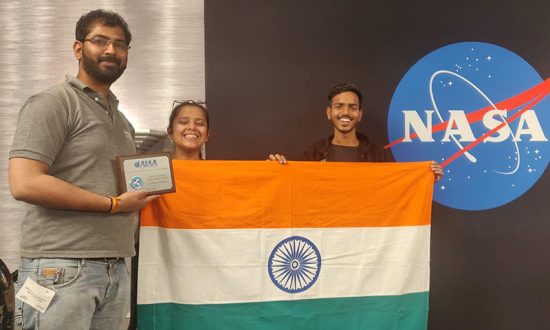 “We are privileged to receive the prestigious award. Our students have been working hard for the past six months and their commitment has paid off. The best part is that this is the first time that we had participated and our rover was much appreciated by the design judges regarding the compact size, unique wheel design, 3 Wheel Tadpole configuration used and the assembly time.” said Tuhin Srivastava, team advisor from the KIET Group of Institutions’ faculty, who accompanied the team to receive the award.

KIET Group of Institution’s four-member team, led by Shatakshi Dwivedi, a mechanical engineering student was competing among 100+ teams from all over the world in presenting the best design for a Mars Rover.  Indian-American NASA astronaut and two-time space flight veteran Sunita Williams attended the second day of the event, interacting with teams and participating in the day’s activities.

Dwivedi (22), who visited the Space Institute for the first time, said, “It was challenging to be a captain but the team was very supportive. Since it was our first time, it involved risk factors. A lot has been learnt from the participating teams and I feel plenty of technology can be brought back to India.” Her team associates Abhimanyu Bhagat, Utkarsh Sharma and Suyash Yadav felt overwhelmed as their project demonstrated excellence amongst participating competitors, hailing from a record number of countries including Germany, the US, Bolivia, Peru and Egypt.

Speaking on the prestigious win, Dr. (Col) A Garg, Director, KIET Group of Institutions said, “Feeling so proud on the milestone achieved by our students, we believe that our commitment to provide innovative and skill based education to our students has been well recognized at the international platform in Human Exploration Rover Challenge, NASA. Awards don’t just give us recognition, they bring responsibility with them and the creativity, skill and resourcefulness demonstrated by Team Interstellar of SAE India Collegiate Club of KIET has set new boundaries for all in future.”

Each year the NASA Human Exploration Rover Challenge features an engineering design challenge to engage students worldwide in the next phase of human space exploration. The annual event is a complex follow-up to the successful NASA’s Great Moonbuggy Race; and, challenges high school and college students to create a vehicle designed to traverse the simulated surface of another world.

Every team had a six-minute window to navigate the course, gathering points and trying to complete 14 obstacles. After constructing their own rovers, teams attempt to transverse a nearly three-quarter-mile course with gruelling obstacles that simulate the terrain found on Mars, as well as other planets through-out the solar system.

“Your positive action combined with positive thinking results in success. With their zeal to experiment, grow, take risks, make mistake and learn from them with an immensely positive thinking, our students got successful in bringing laurels not only to KIET Group of Institutions but to the Nation as a whole. Heartiest Congratulations to all!” expressed Dr Manoj Goel, the Joint Director, KIET Group of Institutions.

KIET Group of Institutions is one of the premier destinations for young minds, offering courses in Engineering, Management and Pharmacy. It continuously strives for the welfare of its students providing them with best opportunities both on the national and international platforms.

OMOTEC Wins at ISEF 2022 Once Again This Year!
Schoolnet Survey: Indian Parents Spend INR 20,000 for Education in Government Schools and INR 47,000 for Education in Unaided Private Schools
Artificial Intelligence and the Way Forward – A Highly Interactive and Thought-Provoking Session for the Students by SICCI as Part of PEAK (Program for Engineers’ Advanced Knowledge)
Ashoka University signs MoU with Max Healthcare to use Genome & Data Analysis to Study Complex Diseases
In a Country of Billion Brains
Coventry University London paves path for extended work experience in the UK through extended MSc courses
CONTACT US