Over 60 Indian schools/universities honoured at the House of Commons, London 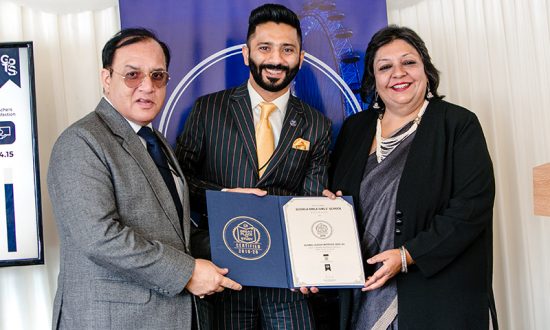 Over 60 eminent Indian institutions including Mayo College, Billimoria, Musoorie International, JD Institute of Fashion Technology, Apeejay Stya University and, Sanskar Valley, Children’s Academy, Satluj Public School, Suchitra Academy were felicitated at House of Commons, London. The prestigious honour was bestowed to the Indian schools and universities with Great Place to Study Certification for their dedication to bring forth progressive measures to the education sector in India.

GPTS certification is awarded to Institutions that have pioneered student happiness and satisfaction in the educational landscape. This league of extraordinary institutions has showcased their greatness factor by performing exceedingly well in the Student Satisfaction Survey (SSI) and proving that they are indeed a great place to study.

Speaking on the occasion, Mr. Shekhar A Bhattacharjee, Founder and CEO, Great Place to Study, said, “We feature institutes on the journey of their stories and the greatness factor on the happiness framework. The Indian institutions who have set benchmarks in terms of student satisfaction are awarded for their major role in bringing positive measures to the education system in India. Great Place to Study Certification is a symbol of exemplary standards”.

Great Place to Study is an international auditing and recognition firm that was conceptualised with a mission to revolutionise existing education models and to promote good teaching practices among educational institutions across the world.

OMOTEC Wins at ISEF 2022 Once Again This Year!
Schoolnet Survey: Indian Parents Spend INR 20,000 for Education in Government Schools and INR 47,000 for Education in Unaided Private Schools
Artificial Intelligence and the Way Forward – A Highly Interactive and Thought-Provoking Session for the Students by SICCI as Part of PEAK (Program for Engineers’ Advanced Knowledge)
Ashoka University signs MoU with Max Healthcare to use Genome & Data Analysis to Study Complex Diseases
K. J. Somaiya College of Engineering unveiled their First Electric Vehicle – ‘Artemis’ for the Formula Student competition, to be held in Germany
JGU becomes the Youngest University to Enter QS World University Rankings 2020
CONTACT US