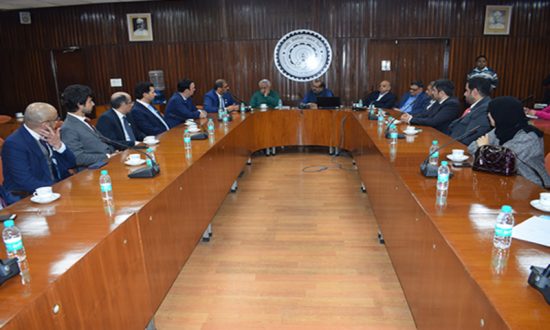 A delegation from the UAE led by Minister of Education Mr. Hussain Ebrahim Al Hammadi visited IIT Delhi on Wednesday and met the institute’s senior functionaries. The Education Minister was accompanied by the Ambassador of UAE to India, Dr. Ahmed Al Banna and members from the various educational departments of the UAE.

While saying that his country is working to transform itself in to a knowledge-based economy, the Minister said that the educational institutions from the UAE would like to have a strong relationship with IIT Delhi.

Mr. Hussain Ebrahim Al Hammadi, Education Minister, UAE, said: “Our idea is how to expand and make the relationship stronger. We can have some joint programmes, exchange of students between Khalifa University and IIT Delhi. The idea of cooperation is very open, but the focus is on how to engage in a cutting-edge innovative technology for the future.”

Prof M Balakrishnan, Deputy Director (Strategy & Planning), IIT Delhi, said: “Internationalisation of our campus is a very high priority. We would like to increase the number of foreign students at IIT Delhi. And, we would also like students from the UAE to come and study here.”

Prof Sanjeev Sanghi, Dean, Alumni Affairs and International Programmes, IIT Delhi, while highlighting the international collaborations between IIT Delhi and several other universities from across the world said: “As part of our international collaborations, we have MoUs, student, and faculty exchange programmes with several countries. Last year, we had started a joint degree programme with the University of Queensland. Under this programme, students will be admitted at the University of Queensland as well as IIT Delhi. They will be having joint supervision and there will be a joint degree that will be awarded. Another joint degree programme is also coming up with NCTU Taiwan”.