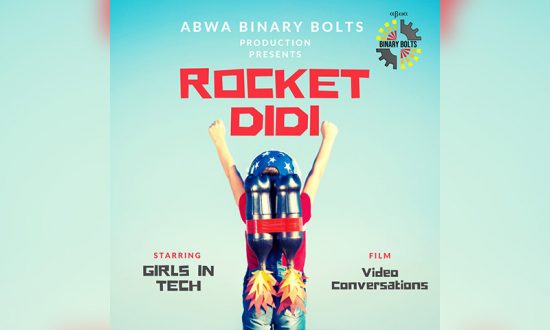 Aditya Birla World Academy Binary Bolts launches their outreach program Rocket Didi to encourage girl students to participate in the field of STEM (Science, Technology, Engineering & Mathematics). Through this program, Aditya Birla World Academy aims to highlight that girl students are as capable when it comes to building successful careers in the fields of technology and robotics. The essence of such empowering initiatives for girls is critical to helping India become a country with strong women leadership across industry sectors.

Aditya Birla World Academy Binary Bolts ‘Rocket Didi’ program was initiated by the students- Sanchay Gadia- 11AS, Vibhav Singh -10, Rishne Jain- Grade 9 primarily because no girls signed up for FIRST Robotics Competition (FRC), an international high school robotics competition. FRC has teams of various high school students, coaches, and mentors work during six weeks to build robots capable of competing in that year’s game that weigh up to 125 pounds (57 kg) as they lacked confidence. Students from grades 9th -12th are eligible to participate in FRC. Out of the six teams from India who participate in the competition, the students of Aditya Birla World Academy observed that very few teams had female participants.

Commenting on the Rocket Didi initiative, Mrs. Neerja Birla, Founder & Chairperson, Aditya Birla Education Trust said, “I am extremely proud of our students at Aditya Birla World Academy who have initiated a programme like Rocket Didi. This is a proud moment for us as it showcases that even at a young age, these kids understand that robotics and similar technologies require the participation of both girls and boys at an equal level. Initiatives such as these will definitely help in bridging the gap that is currently huge in the field of STEM and encourage girl students to actively participate in competitions such as FRC (First Robotics Competition) and others. I am looking forward to witnessing an increased interest from girl students to become a part of Binary Bolts.”

Mr. Prodipta Hore, Coordinator-International Initiatives, Aditya Birla World Academy said, “Robotics and similar technologies have predominantly been a male dominated career choice. This initiative has been developed to showcase how participating in competitions such as FRC can be interesting for girls too. Through this event, we want to encourage girls from a young age to develop the skillset required and awaken interest in them to choose career path in the field of technology and robotics. We sincerely hope that this initiative will motivate girls to pursue STEM as a career choice.”

The word “Rocket” from the ‘Rocket Didi’ initiative hints at rocket science which is often regarded as being extremely arduous. The word “Didi” in Hindi, refers to a sister. By putting the two together – Rocket Didi aims to demonstrate that women are capable taking a center stage in technology led careers, through voices of women achievers such as Ms. Geetha Kannan, the founder of Wequity, Ms Ashwini Asokan, an Artificial Intelligence expert and Ms Debjani Ghosh, the first woman president of NASSCOM.

Sharing her thoughts on the Rocket Didi initiative, Ms. Debjani Ghosh, the first woman president of NASSCOM said, “I would like to congratulate the students of Aditya Birla World Academy on undertaking this ambitious goal to encourage women to pursue STEM. It is good to hear that students are not just thinking about the problems our country is facing but also working on resolving them. Today, technology plays the most crucial part in every vertical. STEM as a career choice is the way to go for someone who truly wants to make a change. I believe that this initiative will help boost confidence in girls to adopt their career path in technology.”

Aditya Birla World Academy presents equal opportunities and avenues for students simultaneously promoting the contribution of both women and men in various fields. The campaign has been planned to spread awareness among other communities around how STEM is an important field of academic discipline which needs more participation from girl students. In addition to Rocket Didi, ABWA has also conducted outreach programs with Avasara Academy, a non-profit organization building a movement around excellence in girls’ education and leadership in India, and Spark a Change, a Mumbai-based non-profit organisation.

OMOTEC Wins at ISEF 2022 Once Again This Year!
Schoolnet Survey: Indian Parents Spend INR 20,000 for Education in Government Schools and INR 47,000 for Education in Unaided Private Schools
Artificial Intelligence and the Way Forward – A Highly Interactive and Thought-Provoking Session for the Students by SICCI as Part of PEAK (Program for Engineers’ Advanced Knowledge)
Ashoka University signs MoU with Max Healthcare to use Genome & Data Analysis to Study Complex Diseases
Importance of Developing Skills that are Relevant for the Coming Decade
Why is Education Much More than Just a Lecture?
CONTACT US