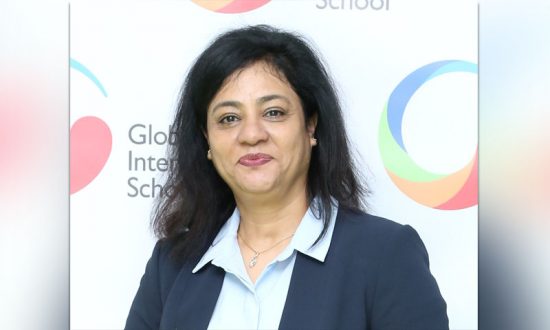 A state champion in lawn tennis and accredited long-distance runner, Dr Heena Rachh has been associated with Schools and Community programmes for the last 25 years, she launched her career in education after acquiring her bachelor’s in child development from the Maharaja Sayajirao University of Baroda in India. She was driven by an unflinching conviction that Education can change lives. Her first job, as a primary teacher, was in a school promoted by Gujarat Heavy Chemicals Limited in Western Saurashtra, India. she kept pursuing studies and acquired degrees in art and education, as she completed her B. Ed., M. Ed., M. A. (English) and ultimately PhD, over next 10 years. During that period, she joined Bharatiya Vidya Bhavan’s affiliated school at Wardha (Maharastra) as Head of the English Department and was soon promoted as academic coordinator for the school. In 2004, Dr Rachh was promoted to the position for Bhavan’s affiliated school at Nadiad, as she became the youngest School Principal in the Bhavans.

Learning begins long before a child learns to speak. Parents, let’s take a trip down memory lane. Close your eyes and visualize your dear child wrapped in a swaddle, staring deep into your eyes, and babbling words as they hear you urge, “Say M-A-M-A, say D-A-D-A.” You must have noticed how fixated their stare is at your mouth. Can you guess what’s happening? Well, your child is using their auditory and visual senses together to mimic your words. As the months roll by, your child passes several milestones – they didn’t just learn to speak in their native language but also make sense of their speech. However, in all of this, did you have to put in strenuous efforts? Probably not! The thing is, we almost take these processes for granted, not realizing that learning a language affects the brain and its development directly. Yet, this fact holds true even for subsequent language learning. Multilingualism is a change that’s good for a young mind.

A new language satisfies the brain’s longing for mental gymnastics

Have you ever been wary of your child’s poor sleep patterns and said, “You need to rewire your brain.” If yes, you’re aware of the power of neuroplasticity, which is the ability of the human brain to change its neural pathways and connections to adapt to different situations. For example, if neuroplasticity were not true, a taxi driver would not possess better navigation skills, jugglers would not have better motor skills, and wisdom would not come with experiences. Neuroplasticity stems from the basic logic that the brain needs to adapt to changes, both perceived and sudden, throughout the life of an individual. It’s like a survival mechanism. Following this logic, it only makes sense that with language learning comes the need to adapt. So, what does the brain do when you pick up a new language? It activates its control mechanisms because multilingualism is a kind of mental juggling. So, even areas associated with attention and inhibition are activated. For instance, if you ask an English-Russian speaker to pick up a marker from a set of objects, they are likely to simultaneously look at a stamp, which is called “Marka” in Russian, and the marker. This is called language co-activation. The sooner a child starts learning multiple languages, the sharper their brain gets. Learning different languages in school can provide children with a number of brain benefits to equip them for life. At Global Indian International School, a holistic development curriculum is practised that includes teaching children multiple languages from primary grades.

It benefits at least three key areas of the brain

Going back to the examples of taxi drivers and jugglers. Do their cognitive functions strengthen overnight? No, it takes intense training to hone a skill, most of which involves repetition. The brain may be made up of fat, but it works much like a muscle. Language learning is a natural exercise that requires repetition. However, the process alone does not improve brain function. It is the neuroscientific power of words that is the life-giving force. Or else, how does a tragic novel make its reader emotional? Every new word that your child hears while learning a new language encourages neurons to form new chemical pathways to make sense of it. The repetition of the sounds associated with each word helps the brain to adjust to the constant mental juggling until it finally improves in three key areas, i.e., memory thought process and connectivity. The amazing part about this is that the more languages your child learn, the better will be the neural plasticity of their brain. High neuroplasticity, in turn, increases the effectiveness of the neuroscientific power of words. In short, multilingualism sets into motion a self-sustaining cycle of development.

It’s no secret that the brain thirsts to make sense of the world around it. This must remind you of the “good old days” when your child just wouldn’t stop asking questions. But that’s also when it all started. It was simply their brain trying to break the complex world into easy-to-digest morsels. Now, mentioning this thirst is significant here, given how every language is a cognitive universe in itself. Peeling back the layers or language processing involves the capacity to use words in a correct manner, the transmission of difficult-to-process thoughts, accurate communication of ideas, and the ability to understand information as the speaker or writer intended. For example, during language learning, your child will be making a lot of decisions, such as, which word suits the context of their speech or how do they best describe their emotional state. This complex process is what enables humans to make subtle remarks, understand humour and sarcasm, etc. Multiply such processing to the number of languages your child learns and imagine how well-adjusted it can make them for complex social interactions, interpersonal relationships, and overall success in life!

Multilingualism allows learning to be the natural process that it is

During infancy stage, a child’s mind is a “Tabula Rasa” or a blank slate. Since the child has no means of expression except for the speech they absorb from their immediate surroundings, the brain starts acting like a sponge. This makes language learning an almost subconscious process. Likewise, there is no such thing as a difficult language for a child. With the second and subsequent languages, the first language often becomes the medium of learning and maintaining the natural process as the child picks a new linguistic skill. This is why language teachers use the method of mock scenarios to facilitate communication between students. Such interactive sessions allow learning to be the natural process that it is. Thus, your child gets all of the cognitive benefits without pressurizing their brain to “learn.” Learning new languages opens a gateway of endless opportunities for children.

Educating Generation Alpha
Sense of Belonging is an Institutional Responsibility and Roadmap to Student Success
The Importance of Teacher and Staff Recognition!
Learning Management Systems & Students’ Support
IBEForuM hosts SMART SCHOOL SUMMIT – SAUDI (Virtual) to focus on the key challenges of the Education Sector
Why Cognitive Skills are Essential for Student Learning and Tips to Develop them Early
CONTACT US