Home /LEADERS IN FOCUS/School Drop Out Should Not Mean Educational Drop Out: The Role of Soft Skills in the Global Education Compact

School Drop Out Should Not Mean Educational Drop Out: The Role of Soft Skills in the Global Education Compact 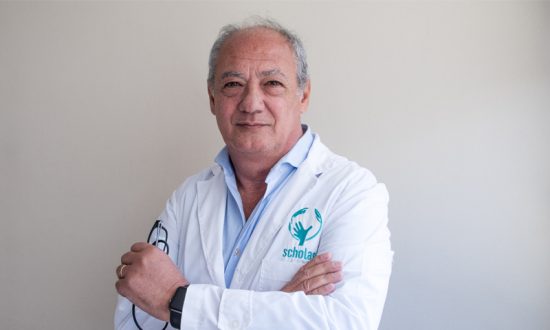 José Maria del Corral is the World Director of Scholas Occurrentes appointed by Pope Francis. Scholas Occurrentes is a network present in more than 70 countries across 5 continents and integrates more than 400 000 schools worldwide, a “call to create the Culture of Encounter”, founded by Pope Francis. A theologian and a teacher by training, he served as teacher and principal at all levels of the educational system and was a pastoral coordinator in numerous schools.

In recent years, the educational and school systems in LAC countries have steadily tried to “catch up” and fully tackle the challenges stemming from globalisation. The results in terms of school access are remarkable: the region reached a net enrolment rate in the primary school of 93.7% in 2018 (World Bank, 2020). Still, they have a long road ahead in assuring the right to quality education, as also encompassed by Goal 4 of the Sustainable Development Goals’ Agenda, particularly Target 4.7.

Schools systems in LAC countries seem indeed stuck in some chronic issues: schools are understaffed, teachers not properly trained, school programmes not updated. The cultivation of soft skills often seems to be outside the schools’ radar. Giving a comprehensive definition of soft skills is not easy, and this makes it even more difficult to systematise their inclusion in school curricula. However, their importance in terms of individual growth, relevance for the community, and job opportunities cannot be neglected.

At Scholas Occurrentes, we have noticed how denying the importance of soft skills in schools in the LAC region is contributing to high rates of drop-out, occurring mainly during secondary school: in 2018, about 20% of students left school before completing lower secondary education (World Bank, 2020). Students often perceive the education they receive as not suitable for an increasingly demanding and globalised world. A global context that, in turn, emphasises the importance of soft and interpersonal skills. Students’ motivation often plummets and accounts for their decision to abandon school, along with other economic and social aspects, which, of course, need to be considered when analysing school drop-out’ causes. 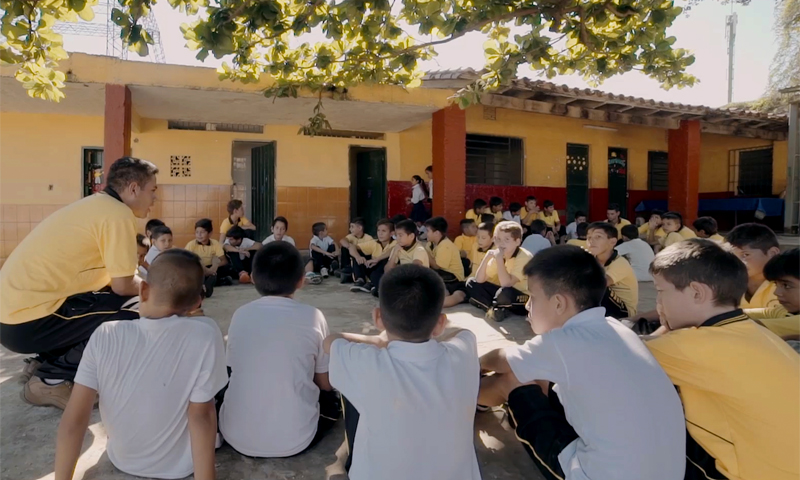 In this setting, our mission is to promote the Culture of the Encounter through an education that generates meaning: we intervene where education seems “in crisis”, where youngsters are progressively disengaging themselves from education or aspire to see a change in their realities. We value a youth-centred approach. Youngster’s socio-emotional skills are at the centre of our action: not only because it is important for their future, but also for their present, and more in this context of a pandemic: their mental health, their interpersonal relations.

We start by listening to youngsters’ (usually aged between 14 to 18 years old) pains and problems. Furthermore, as we consider education a societal responsibility, we also engage teachers, principals, families, institutions, civil society. And we tailor our actions, always working on socio-emotional skills, with different “languages”: arts, sports, critical thinking, music or poetry, for instance.

In 2016, Scholas arrived in San Antonio de los Cobres, a small village in the province of Salta, Argentina, and organised an experience of “Scholas Citizenship”, a project that involves youngsters in the detection of problems within their communities and in the drawing up of proposals to tackle them. The participants reported their concerns about the high rates of youth suicides since 29 of their friends had killed themselves in the previous months by jumping off what they called “the bridge of the solution”. 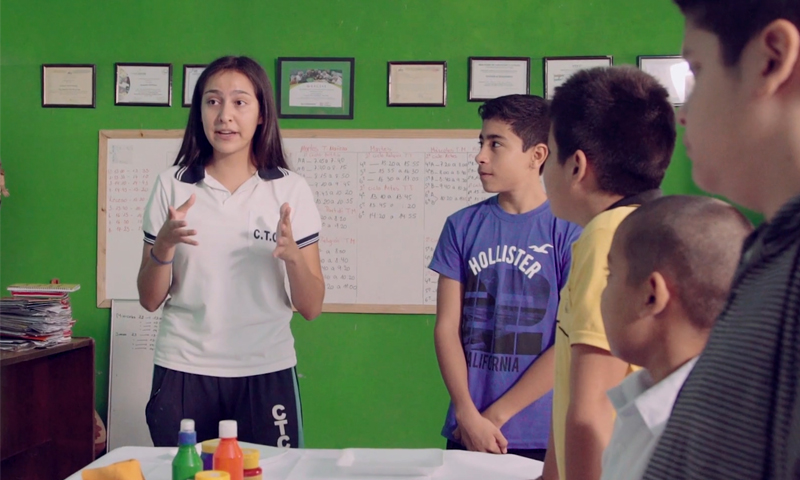 We worked with them, trying to boost their self-confidence, their spirit of initiative, their solidarity links. First, they created a cinema, the first one in town, which allowed the students to come together and put their feelings to work. From there came the idea of painting the bridge, giving it a new meaning. They also organised activities for their community, such as a space for kids, the cleaning of the river, or visits to the local hospice. After this experience, no other kid jumped off that bridge. The intervention showed how crucial it is to give youngsters the possibility to be listened to, as well as the space to take initiatives. It can make a huge difference, in schools, in communities, in their lives. For this reason, Pope Francis the 5th of June of 2020, referring to Scholas’ education proposal, said: “Scholas promotes an education that listens, creates, and celebrates.”

In Paraguay, Scholas has been cooperating with the national Ministry of Education to cope with the high rates of drop-out, working since primary school. In this case, the issues raised by the government seemed to match those expressed by youngsters’ during the “Scholas Citizenship” experience: quality education and teaching methods. The intervention foresees the extension of the school day, support to teachers, and the strengthening of intergenerational links through an intervention model that makes adolescents educators of the children in primary school supervised by their teachers and the technical teams of the Ministry. The youth is trained by Scholas to carry out artistic and sports workshops involving kinds, who are thus involved in extracurricular activities during the afternoon: this, in turn, increases their motivation to attend school during the day. In 2018, we trained 904 sport and 885 artistic trainers, and the programme was being implemented in 43 Paraguayan schools. The results have shown an increasing commitment within students, as well as a more positive attitude towards their future. 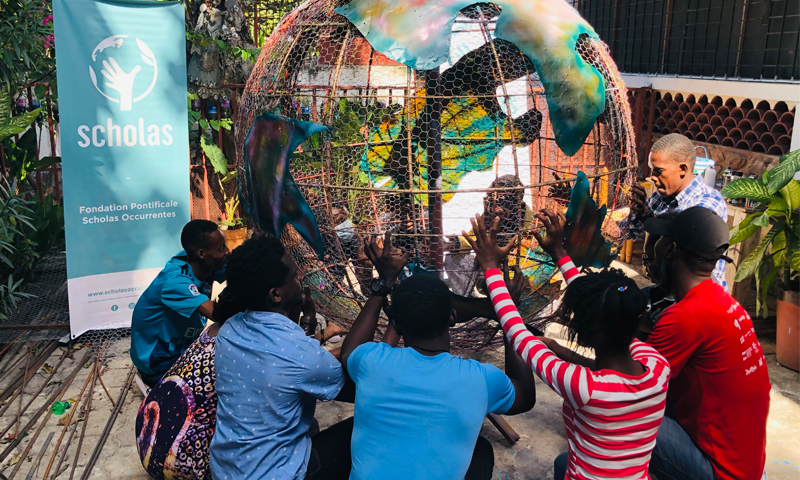 Three aspects have particularly contributed to the success of the initiative:

Art has also been at the core of Scholas intervention in Haiti, where the public education system presents many weaknesses due to the generally difficult situation the county is facing since the earthquake. Many kids and adolescents cannot access schools since, in the most part of the cases, they are private and not affordable institutes. The experiences of Scholas Citizenship carried out since 2016 also involved participants who were not enrolled in any school.

Again, youngsters outlined worries related to education: the difficulties in accessing schools, the necessity to update the curricula and the teaching method. In this case, however, also the environmental degradation of the island emerged as an urgent issue to them.  The project that followed is called “Pibel Poubel”, it is a pun in Creole language, which means “a more beautiful trash. It aims at raising environmental awareness among schools and the community while calling for concrete actions for the caring of the environment: youngsters work with local artists to build “artistic bins” with recycled materials, thus rediscovering the local Haitian culture and cultural expressions. Then, the bins are placed in primary schools and used to collect plastics. The process is accompanied by workshops with students and teachers to outline the importance of environmental education in schools. Almost all the students who participated in the project reported an increase in their perception of being committed to the community, in their ability to work in teams, and in their self-confidence. Again, the project proved how introducing new, stimulating perspectives in education and boosting soft skills can not only change youth attitudes but also reinforce and re-shape their links to the community. 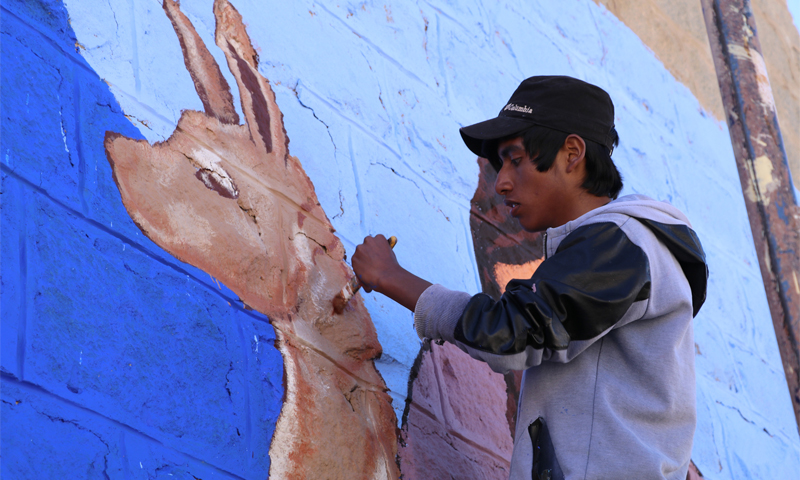 There could be many more examples on the importance of soft skills in education and on how to stimulate them in a creative way. In Scholas, we started by listening to the youngsters, teachers, and schools’ principals from the region, building an individual path with them. And this has brought to the emergence of many unique and innovative educational experiences that share some commonalities: the willingness to boost skills such as communication, empathy, solidarity, civic engagement, critical thinking, and to engage the whole community for a truly and shared improvement of education in the region.

The process is not devoid of difficulties and obstacles because, as previously said, it often requires a change in mentality and a cross-cutting commitment. As a promoter of the Global Compact on Education, Scholas has been spreading the idea of education as an inclusive process, which involves not only teachers and students but every member of society. Only by pooling perspectives, ideas, competencies, and approaches can a true change be achieved. For this reason, we continue to work side by side with different actors to stress the importance of soft skills, and in particular socio-emotional ones, in the youngsters’ present and future perspectives. 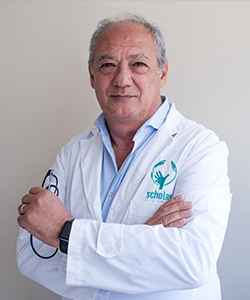 José Maria del Corral was tutor, Director of Studies, Vice-Rector, Rector and Director General in several parishes, and congregational and lay schools. He was also the founder of School of Neighbors, a project created to transform education, achieving the integration of students of different faiths and origins. Among other distinctions, he received the UNICEF award for the educational organisation most mobilised in the world by inclusion, from Queen Letizia of Spain.

Leading with Passion and Purpose
SEL and Why It Matters to Students
How the Design for Change Methodology Addresses the Needs of Students in the 21st Century
Our Lives on a Continuous Loop – The Relationship between Social Media Use and Wellbeing
Education Uninterrupted: Technology Free Holistic Learning
Think Equal in Colombia: The End of Discriminatory Mindsets Starts with the Children
CONTACT US