Sport as a Tool to Educate and Spread Peace 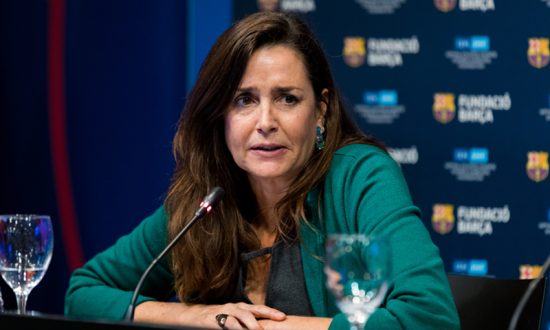 With over 24 years experience in the non-profit sector, Maria Valles has held national and international positions, such as head of Communication and Advocacy at the Global Health Institute (IS Global), Executive Director of the AIDS Foundation, and Head of Fundraising and Communication in Doctors Without Borders (MSF). She has also directly coordinated various programmes in the field of humanitarian aid and development in Africa (Kenya) and Latin America (Guatemala).

We are all aware, that nowadays Latin America faces important challenges, among others, high rates of poverty and violence, the climate change impact, and the consolidation of its political and economic integration. In addition, Covid-19 and its effects put the whole region in an extremely vulnerable situation.

With these challenges as a baseline, the Barça Foundation has been working in the region for more than a decade, and to date has reached more than 45,000 children and young people with social inclusion and violence prevention programmes through sports with the support of different partnerships of private companies and public entities, and over nine million euros have been devoted to the implementation. One example of the Barça Foundation’s action is the work it has been carrying out in Colombia since 2016.

In his message on peace and education in Colombia (1998), Gabriel García Márquez emphasised that violence can only be remedied in a society that “guides us from the cradle in the early identification of vocations and congenital aptitudes to be able to do all our lives only what we like… and that vindicates and exalts the predominance of the imagination.” And in keeping with this spirit, the Barça Foundation works in this country with the aim of mitigating the risk factors that contribute to the increase in violence among young Colombians. As the Nobel laureate believed, also our organisation invests in life skills trainings through sport. To date, more than 14,500 young Colombians and Venezuelans have participated in projects that prevent the early recruitment of children and young people by armed gangs, prevent recidivism amongst young people who are already in the juvenile justice system, and foster life skills. 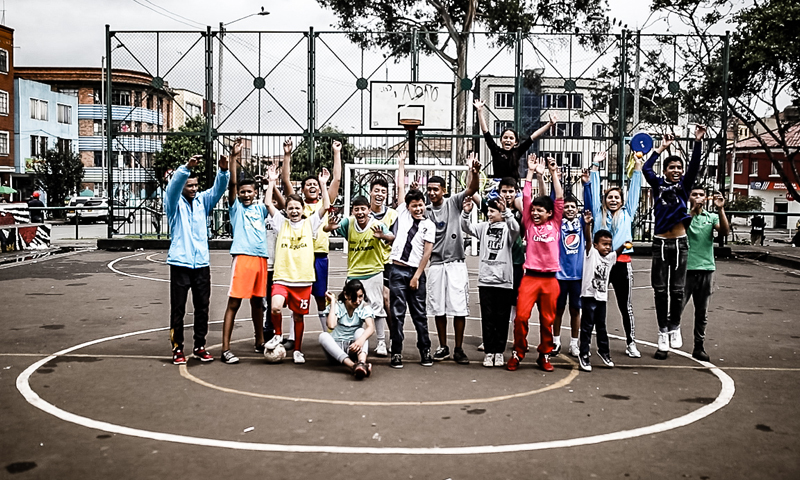 In Bogotá, for example, many young people are forced into a life of crime. Theft, drug trafficking and assaults are the most common crimes among minors. With the aim of contributing to the reduction of these crimes, our organisation began to develop the “En la Juega” project in 2018. Implemented in 7 locations in the Colombian capital, and in coordination with the Secretariat of Security, Coexistence and Justice, and the Bogotá Chamber of Commerce, the project is based on sports and cooperative challenges as tools to prevent youth violence and reduce recidivism.

To achieve this, sports games are used to strengthen the emotional, cognitive, behavioural, and logical skills of young people so that they learn to make better decisions in life and avoid participating in violent and criminal behaviour. Skills are reinforced through the implementation of three elements: Cognitive Behavioural Therapy (CBT), reinforcement in mathematics, and attention to the families of the participants.

This socio-educational project took place over nine months in 11 parks across 7 locations in Bogotá, involving more than 1,850 young people. In each of the more than 1,300 sessions held, activities were carried out aimed at identifying, experiencing, and controlling emotions, recognising situations, and associating them with appropriate behaviours other than aggression, communicating assertively, working as a team, and developing values oriented towards achieving life goals, among others. 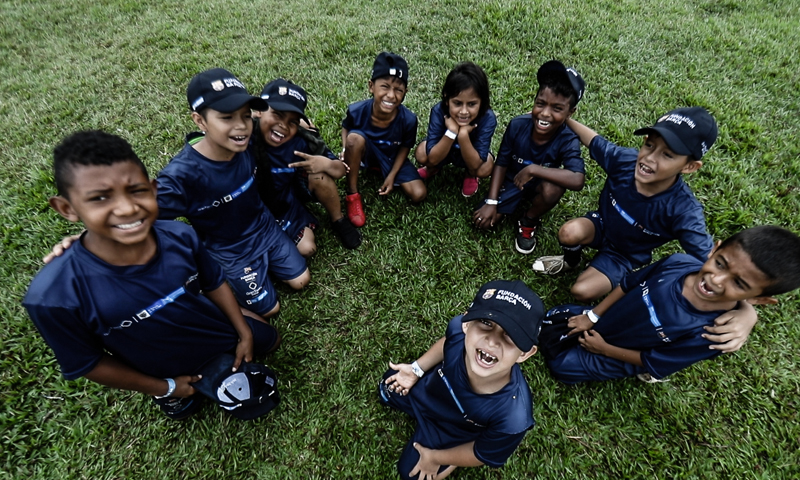 Results were monitored to appreciate the changes generated by the programme. In a comparative analysis of emotional and behavioural indicators between the situations prior to the project and that after participating in it, we find results that reinforce our belief that violent behaviour among young people can be reduced through sport.

Encouraging social interactions between rivals from different teams considerably increases the interaction between athletes and coaching staff, both with team building days and with friendly tournaments. Ultimately, it is about showing that we are social beings and that we need others to be able to be so. It is through others that we learn to communicate and relate to the world.

Some of the most important positive impacts revolved around increasing levels of empathy and rejection of discrimination. In cases of conflict between participants, they sought solutions peacefully. If someone provoked them, they distanced themselves and calmed themselves by practising breathing exercises. It was also evident that positive leaderships were beginning to emerge that moved away from the use of force and instead made use of assertive communication to get people involved and achieve the goals of the entire group.

Additionally, there was an increase in the perception of security. The impression of insecurity and danger associated with the parks diminished. The surrounding business owners and traders no longer pointed to them as the most unsafe places in the neighbourhood. At the same time, there was a qualitative change in the explanations given by traders about the causes of insecurity. Young people, known as “vicious,” were no longer the cause of the problem of insecurity in the sectors.

Similarly, the “En la Juega” initiative has generated a sense of belonging and community towards the group among the participants. The place where we hold our sessions was perceived as a safe space that many are willing to defend. 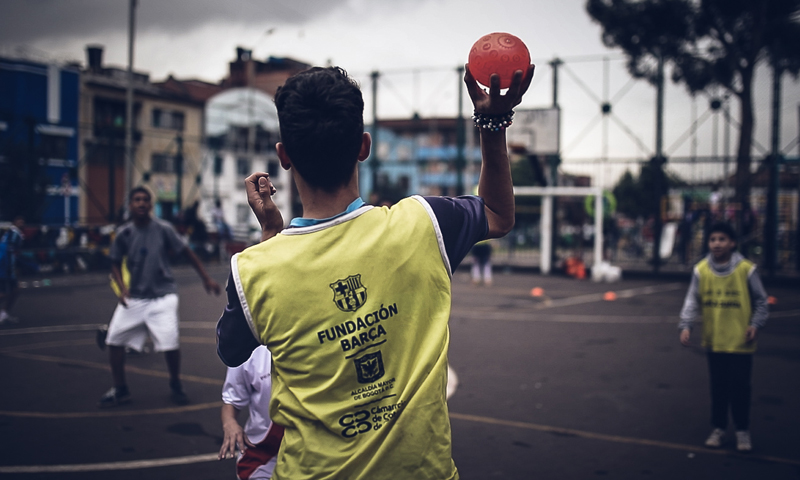 An example of the success of this project is Christopher Andrés, a Colombian boy from the Santa Fé neighbourhood. Christopher is 11 years old and has the sharpness of someone who has had to make a living on the streets. The young boy could pass for one of Dickens’ abandoned children, but he is not a fictional character. He is pure authenticity and optimism. “It’s great not feeling alone. Through play, we have learned to stop fighting and be quiet. Now I am able to play calmly and without anger.” The soundtrack of his childhood has been a stubborn symphony of mutinous dogs. With all the strength of someone who has survived on the streets, he says: “Here I have learned to get along better with others. Before, I was a little rascal.”

Oscar Park is the epicentre of the community. The park was dangerous, and it had dense and strange energy. Kids would go to the park and destroy it. Now the park is a safe space. Young people have found a neutral zone for harmony and play. The park has become a place of emotional and social transition.

Another project that is yielding positive results and encouraging us to continue working in this line is the one in Putumayo. Supported by Gran Tierra, football and other sports activities are used there as tools for reflection to improve the lives of vulnerable children and young people from problem areas. Over participants, their families, educators, and local people from 6 neighbourhoods of Puerto Asís have improved their educational, physical, and social well-being. More specifically, the participation of young people in this project has become a safe and healthy leisure alternative that replaces other potentially dangerous activities; it has promoted the acquisition of life skills, especially self-control and the management of emotions; the fostering of interpersonal relationships has provided a distraction and escape from family conflicts, and has provided adult role models in an environment with little family support. Similarly, families are also affected, and their participation has contributed to more respectful family life.

At the Barça Foundation, we understand that we can only move forward and achieve the necessary changes through values that work on both the individual and collective levels. We do this by applying strategies and coping skills in sport and in life that are designed to increase opportunities. In other words, looking at sport from the positive side, fostering respect and empathy for others, and unreservedly condemning the violence. In this spirit, the Barça Foundation understands that sport is not an end in itself but rather a tool to educate and spread peace. 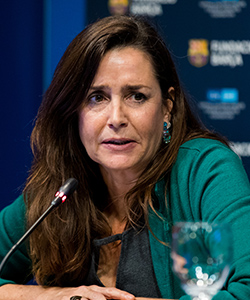 In May 2016, Maria Valles joined Barca Foundation as Executive Director. From 2012 to 2016, she was a member of the Board of Directors of Doctors Without Borders (MSF) in Spain and the Director of Corporate Development at the Vicente Ferrer Foundation (Spanish NGO present in India).

With a Master’s degree in Cooperation and Development (University of Barcelona) and Diploma in Culture of Peace and Conflict Resolution (Catedra UNESCO-UAB), Maria Valles originally trained in International Management and Foreign Trade in Paris. She is interested in managing non-profit organisations, strategic planning and development, sustainability strategy and environment, communication and advocacy, project management and organisational leadership.

Leading with Passion and Purpose
SEL and Why It Matters to Students
How the Design for Change Methodology Addresses the Needs of Students in the 21st Century
Our Lives on a Continuous Loop – The Relationship between Social Media Use and Wellbeing
Think Equal in Colombia: The End of Discriminatory Mindsets Starts with the Children
Changing the Narrative: The Power of Wikipedia to Foster 21st Century Skills
CONTACT US