The English Language as an Accelerator for Tech Talent

That the 21st century and the Fourth Industrial Revolution have radically changed how we think of education is no longer a surprise to anyone. The beginning of a global pandemic has only exacerbated the necessity to quickly and efficiently adapt our practices to the current global needs. The advent of new technologies, and their accelerated adoption, has created a demand for a labor force that simply wasn’t there. An increasingly large share of the labor market has reprioritized the skills it requires for the foreseeable future with a clear focus on digital skills such as coding and data analysis as well as for relatable soft skills such as critical thinking, problem solving and creativity. In Latin America the demand is expected to grow exponentially with studies projecting a demand of 10 million IT jobs by 2025. The demand will mostly be pushed by US based companies nearshoring their IT needs. Already in 2021 the number of foreign companies hiring in the region increased by 156%, the largest increase worldwide.

While the supply of IT professionals is increasing steadily to meet the growing demand, one large barrier still prevents Latin Americans from obtaining full access to these jobs, their language skills. The region is considered to have one of the lowest levels of English proficiency in the world, ahead only of the Middle East and Africa region. According to the English Proficiency Index, Latin America scores a Low Proficiency level of the language which is equivalent, or inferior to, a B1 level of the Common European Framework. Unless current and future IT professionals can be upskilled and trained in the use of the English language for work related contexts, many of the millions of future vacancies will remain just that, vacant. 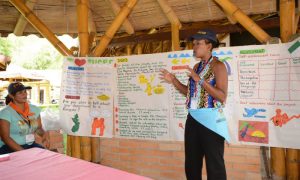 PrimeraHFC has over 20 years of experience teaching languages in both North and South America and in both private and public sectors. Specifically, in the past years the organization has focused on the teaching of the English language in Colombia’s public schools. To this end, PrimeraHFC joined forces with different local institutions in the implementation of public policy programs aimed at increasing the acquisition of the English language by Colombian students and teachers. The model we implemented for such programs consisted in the use of native English speakers that could join the students in the classroom and co-teach alongside their local teachers. This method seemed to emphasize communicative competences such as speaking and listening in an attempt to maintain the subject more relevant and interesting to students which, regardless of their grade, had little or no level of language proficiency. These programs gained popularity and helped increase awareness of the state of bilingualism in Colombia’s public school system. Bringing foreign native English speakers to the classroom broked paradigms that only private schools could offer such services and even if only symbolically it started chipping away at the inequalities between private and public high schools.

We implemented these programs all around the country, the first one targeted Colombia’s vocational trade schools (Servicio Nacional de Aprendizaje) with 53 volunteer teachers impacting 10 vocational training centers. Due to the initial success of this strategy a much larger program shortly followed reaching 374 public schools with close to 700 volunteer teachers. Later on, several local municipalities and departments decided to introduce these programs in their own territories to either support or continue the national policy. The cities of Bogotá and Medellín both decided to implement different versions of this model as well as the department of Valle del Cauca. 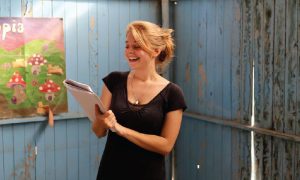 These programs were enacted over a period of 4 years from 2014 to 2018 following the guidelines of the country’s national development plan. PrimeraHFC alone reached a student population of over 300,000 and 430 public schools. Despite the promising outreach these programs were eventually discontinued due to changes in the political agenda and new priorities arising for new administrations. This abrupt change forced us to once again face the harsh reality that working with the public sector does not guarantee continuity of practices and therefore reduces our hope for creating a sustained and lasting impact on our communities.

The coinciding of these changes in education policies and the advent of the global pandemic forced us to take a hard look at our impact model and how to effectively employ our years of language teaching experience. Firstly, we decided to pivot towards partnerships with the private sector so as to minimize the risk of long hiatuses or abrupt changes in strategies. Secondly, to ensure a measurable and lasting impact, we decided to focus our efforts on vocational training so as to have immediate feedback from our student’s employability rates. The choice fell almost naturally on the high-tech sector, a high growth industry where demand for skilled and English speaking professionals is outpacing the available supply. A sector that due to its specificities can quickly train and upskill young Colombians and therefore contribute significantly to reducing the country’s high unemployment rates by providing well paid jobs.

In this new venture the first natural partner we decided to begin a dialogue with were coding schools. In alignment with our vision, coding schools offered a promise of employment after a 3 to 6 month period of intense training in basic digital skills. Our market studies confirmed the effectiveness of their model but also identified where they came short, language training. While the absence of English proficiency did not affect employability rates it did significantly affect their entry pay level, their chances of career advancement and the choice of applying to remote positions offered by foreign, often US based, companies. With this in mind we decided to develop a new methodology that took the best from our pedagogical experience and tailor it to the high-tech industry to bridge across that final gap that is still present in the labor market. We became a Bilingual Talent Accelerator. 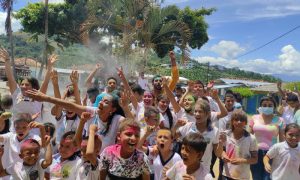 Our method consists in delivering an accelerated language course tailored to the specific needs of the students and the industry they are about to enter. We create a curriculum based on the student’s and the company’s needs in which we use case studies and work-related vocabulary that reflect the duties and responsibilities that our students will experience on the job. Apart from this, we include precise objectives for each session and the whole level, which help our students and teachers pursue a common goal. We understand that learning a language like English in Colombia will benefit their incomes and give them a different projection in their careers and lives. Furthermore, our teachers are all native speakers trained in developing language and soft skills valuable in a global market, such as cultural awareness and sensitivity, accent reduction, and common expressions related to specific fields of study.

The first line of action we’re carrying out is alongside coding schools. Partnering with coding schools allows us to bring together their technical knowhow and our own language teaching experience to create the most complete training course for our students to get higher paid jobs upon graduation as well as to quickly advance in their own careers. Our second line of action is by working directly with tech companies that are having difficulties tracking down talent with both digital skills and language proficiency. In this scenario we are able to quickly identify individuals with the right set of skills and accompany them in a fast-paced language program that will allow them to meet the hiring requirements of our partner companies. This new path we ventured in has given us great satisfaction and allowed us to measure our impact more readily and efficiently than we were able to in the public sector. We no longer measure our success on the acquisition of language levels but rather on our capacity to transform our students into bilingual professionals able to work and communicate in multicultural environments and therefore obtain well paid and stable employment.

Andrea is co-founder of PrimeraHFC, an organization that since 2002 has worked in education and bilingualism programs and since 2010 has mobilized more than 3,000 English teachers to Colombia. Andrea is an architect from Universidad de los Andes, she has an emphasis on Asian studies, Italian language and culture, and Japanese language and culture. Andrea is an Atlas Service Corps fellow and worked at Think Impact in Washington DC and coordinated the Global Development Ambassadors program in South Africa. In 2019 she opened DOT Center for Innovation and Coworking and in 2020 she co-founded Prosperity Makers, a company dedicated to education for employability. Andrea has worked as a representative in Colombia and a consultant for Partners of the Americas, ITDP and Ventures. She was selected by Gerente Magazine as one of the 100 most influential leaders in Colombian society.

Paolo Barone is a development economist with years of experience in the management of education programs in Colombia. Paolo has coordinated English teaching programs for different public institutions such as the Ministry of Education, the Department of Valle del Cauca and the Cities of Medellín and Itagúí. After a brief teaching experience Paolo developed an interest in bilingual education and the use of foreign native speakers in co-teaching practices. Paolo is currently Director of Partnerships at PrimeraHFC exploring the synergies between a bilingual education and the acquisition of digital skills for the global tech market.

Select the Right Subjects in High School Aligned with your College Majors
Regenerating Education by Leading from the Middle: A Reflection Checklist for Districts
Virtual Reality Based Education: Power of Metaverse
Language Eco-Tourism: The Beginning of a New Era
Make Your Students’ Growth Visible with Digital Credentials
Building an Ecosystem with Purpose at the Center
CONTACT US