The Need for Educational Leaders to be Empathic and Effective Communicators 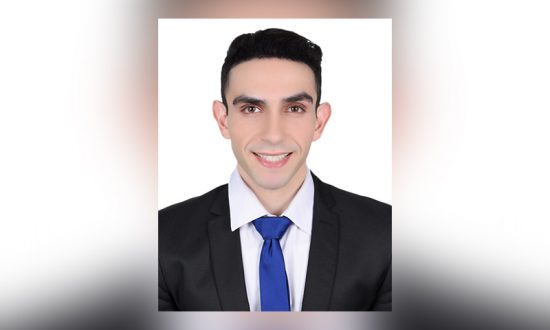 Sherif Basiounysi a high school mathematics teacher and instructor with five years of solid experience in education and research-based inquires. A graduate of electrical engineering and holder of a master’s degree in education from Middlesex University, Sherif regularly update himself with new educational strategies and organize workshops to showcase new students’ approaches, thereby fulfiling their educational needs. A strong believer in the power of students’ positive wellbeing, Sherif stresses on maintaining a constructive relationship with students built on motivation, encouragement, and trust. For instance, he regularly starts his classes with a motivational quote that grasps the attention of students and make them believe that they can achieve whatever they want if they believe in themselves.

Effective leadership and management are essential for schools or educational organisation to be successfully giving equal opportunities of learning and enhancing students’ performance. Blandford (2006) concludes that school effectiveness often correlates with quality leadership. Adding to that, Leithwood (1994) shows that leadership projects in a way on how teachers perform. Both of these authors indicate that there would be 21% increases in student’s achievement under successful leadership.

For communication to be effective, various factors should be considered:

However, this article focuses on effective communication through empathy and the impact of that on teacher’s performance. Arnold (1999) defined empathy as the ability of a person to perceive and understand another person’s emotions accurately.

Empathy from the employer side makes the situation more understandable as the principal would effectively take over the same state of mind as teachers to reach their concerns, doubts and act upon that. It also helps principals to test the situation cognitively and weighs all available options. Peters and Waterman (2004) indicate that supportive communication environment would consistently create cooperative working strands between employer and employees. In contrast, Blandford (2006) describes having a closed communicative environment correlates negatively with the teacher’s response. When there is no empathy or valuable understanding of other emotions, teachers would feel apprehended. Thus, the teacher’s performance would get affected, and eventually, student’s achievement levels would be questioned. Despite prior evidence, Grant (2008) found that leading schools require not only empathy but also a wide range of knowledge and ability to resolve conflicts that might exist in schools because schools are such a diverse community with different aspects that should be taken into consideration.

Furthermore, Badea and Pana (2010) agree that leaders may negatively create such a negative environment and produce a state of dissonance when there is no empathy in the way of communication, as it could be achieved through the solid base of self-knowledge. If leaders cannot sense and feel their emotions, they would never know other feelings or understand their actions, where valuing feelings influence a vital role in emotional leadership (Badea and Pana, 2010).

Thereby, emotionally intelligent leaders can determine the efficiency of the organisation, helping people to reach their obligated goals. Pescolido (2002) argues that successful leadership occurs along with emotional leadership. In qualitative action research on 20 groups, Pescoliodo found that individuals with high empathy understood work reactions better than individuals with lower empathic reactions. Although limited studies have examined the way of leadership through empathy which occurs in educational organisations, the previous research suggests that empathy should always be considered as an essential skill in leaders.

The theory behind having effective communication between leaders and employees might be divided into two branches, one from the educational perspective and the other from a leadership perspective, explained in the following section. ”The care was manifest in actions that were supportive and nurturing, aimed at making someone feel good about what he or she was doing, as well as serving his or her support, commitment and trust” Noddings (1996). This statement firmly resides with the importance of care as an empathic leadership to the pedagogy of care, as Noddings emphasises the importance of such skill in leadership.

Moxley (2001) found that with a reflection of modern Skinner’s theory that empathy correlates with leadership behaviour and influence. A study done by Lussiez (2009) examined skinners theory about empathy, on school principals to conclude that there was an important counter between teachers willing to go beyond what is required with those principals who were rated more empathic.

Moreover, there is a theoretical leadership background for empathic leaders, that is broadly researched in the literature. Previous research indicates the empathic leader who comes from a transformational leadership model theory, where this model fits the modern schooling structure, as schools being such a diverse culture with a lot of managerial initiatives that the principals hold (Leithwood, 1994). Transformational leadership is defined as the power of leaders to motivate or encourage staff to transform their abilities into full potential (Bass, 1996).

Nevertheless, there is a dearth of research about how transformational leadership theory relates to principal’s performance as active leaders and teacher’s performance, where it shows how teachers are motivated to perform effectively (Eyal and Roth, 2011). Synthesizing the evidence of such leadership theory that has a vital influence not only on enhancing teacher’s performance but also empowering positive communicative climate in the entire school community (Leithwood and Sun, 2012).

In addition, Leithwood (1994) argues that successful school principals use practices that motivate teacher’s performance in class and therefore, shapes teacher emotions towards work to be more efficient. However, understanding how to enable a well-honoured communication through empathy as a leadership skill in schools, and the effect on teachers’ performance is limited and yet to be actively researched (Leithwood and Sun, 2012).

The below figure summarizes the contributing factors that affect communication in leadership styles. 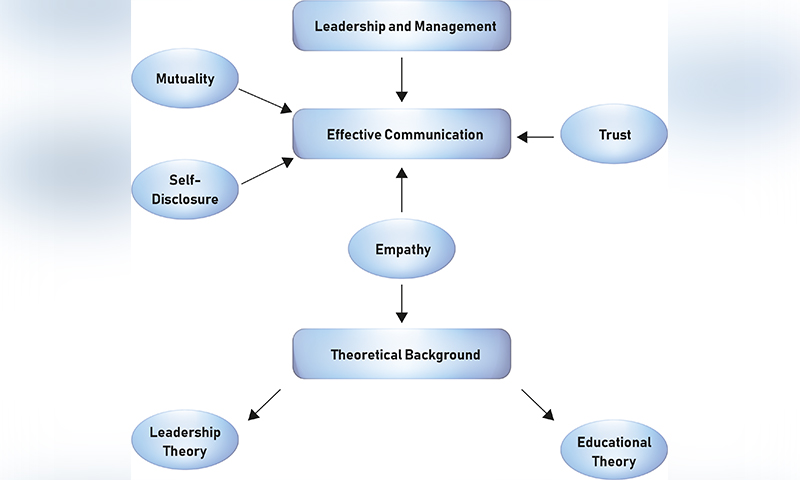 International organisations like UNESCO, the United Nations, the world bank and the British parliament uses effective communication through empathy to understand the work culture and enhance employee effectiveness (Elias, 2003). The rise of interest is no surprise after some of the latest behavioural and educational research that promotes the use of effective communication through empathy because it enhances performance effectiveness, and strengthen resilience (Fernandz, 2010). A ground-breaking recent study was done in the University of South Wales, that researched about 5600 people from 77 organisations the capacity of leaders to be empathic had such a significant impact of employees satisfaction, task management and work environment (Schonert-Reichl et al., 2015). Similarly, a study done in Israel about the principal’s emotional recognition ability was found to be correlated positively with teacher performance and the way teachers manage required tasks (Berkovich and Eyal, 2017). Interestingly this study was subjected to some limitations as it sheds light on different transformational leadership styles that made the communication effective and did not focus on one particular aspect of effective communication like empathy or mutuality, and the gender difference might have affected the findings of the study. Nonetheless, very few studies tend to focus on the empathic leadership in schools and the outcomes on teachers’ performance during task management.

Previous research occurred in the U.A.E investigated the relationship between emotional intelligence in school principals as a swaying factor and teachers’ satisfaction (Jorfi et al., 2012). It has been shown that there is a link between empathic leaders in schools and teachers’ performance in general. The study indicated that in educational organisations in Dubai when managers promote a safe, productive climate of communications that make teachers feel motivated to push beyond what is required and promote managing their tasks effectively. Empathic managers find a way to communicate with teachers efficiently to foster one of the emotional intelligence skills, which is empathy with employees.

In compliance, with the above study, the Ministry of Cabinet affairs (2019) in the U.A.E has issued an official document regarding government leadership model. Emphasising that one of the essential leadership skills to communicate effectively with employees in any organisation not only in educational ones is leading in an empathic way. That encourages people to do more and effectively leverages other capabilities. Empathy falls under the critical factor of what the Ministry called leadership spirit to demonstrate how powerful communication could be through empathy. One of the mastery skills that government school principals would have is to be an effective communicator with the skills and ability to instil and drive the desired values.

Teachers nowadays face various challenges in everyday school life. Observing an effective communicative environment, the researcher school helped teachers to feel valued and encourages them to do more. Thus, that would usually make teachers feel pressured, stressed, and might eventually affect their overall performance. With that being said, the phenomena of having a non-effective communication would highly question the entire school environment, and how teachers would perceive the image of school leadership, where that might affect students as well if they felt that the school does not offer that kind of communicative environment (Gerdes, 2011). Grounding an adequate communication would be highly beneficial mainly to prevent adverse events from occurring, or to avoid blaming an individual. Thereby, the need for equipping leaders with skills of effective communication through empathy is an urge to help schools in the local context to secure positive communication between principals and teachers. Effective communication is by far one of the essential leadership skills that school principals or academic leaders should have, as suggested by different studies to ensure a thriving school culture and a valuable relationship between leaders and staff (Leithwood, Sun, 2012 and Leithwood 1994). That would ultimately make teachers in positive environment feeling valued, and their contribution would make a change.

Being a successful leader comes with many challenges of self-awareness and understanding of other emotions to act reasonably towards incidents and to seek empathy in order to understand other perspectives, which in turn would make teachers valued. Hence this article aims to evaluate the need for effective communication using empathy and the impact on teacher’s performance.

The Education of Second Language Learners: A System in Plausible Deniability
Educating Generation Alpha
Sense of Belonging is an Institutional Responsibility and Roadmap to Student Success
The Importance of Teacher and Staff Recognition!
How Online Schooling has forced India to confront the Digital Divide
Ken42
CONTACT US