A Spark That’ll Turn into Wild-Fire or Simply Linger as A Flame? 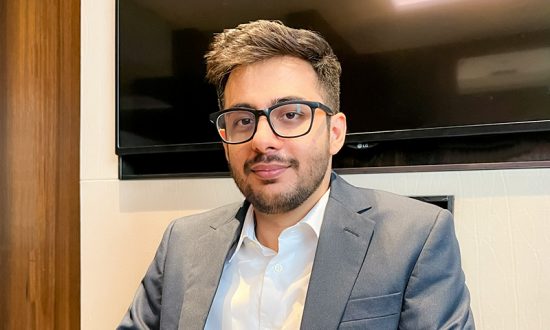 Mr. Lavin Mirchandani is the Co-founder of ConnectEd Technologies, which is an edtech social enterprise that specializes in creating tailor-made technologies and deploying large-scale developmental programs that make quality education accessible to government schools and the children studying therein. For the company, he leads Content Development and Finance, which are two critical functions that lead any edtech enterprise towards a sustainable business model. In a situation where the edtech industry in India is plagued by companies that have raised immense capital to achieve scale, but remain largely unviable, Mr. Lavin Mirchandani has been able to leverage his past experience in the finance industry to build a commercially viable business model for the company from the first year of business itself.

Over the last 10 years, enterprises in India’s EdTech industry transitioned from developing technology-based physical infrastructure that improved in-class education, to organizations that took advantage of the growing penetration of personal computers, smartphones and internet connectivity to serve quality learning to students in classrooms as well as at home. By making this transition, EdTech organizations evolved from complementing age-old educational setups to pushing them towards new practices, and even competing with them. While institutions improved their teaching practices by integrating EdTech solutions, alternative sources of education such as tuition providers and publishers of educational guidebooks felt the heat of competition as EdTech enterprises were serving quality education to a large number of students with a lot more effectiveness and efficiency.

Decision-making among Indian consumers – with regards to educational services & products – is fiercely driven by past results and positive word-of-mouth, which take time to develop for any organization. As a result, even though EdTech organizations were able to exert pressure on age-old secondary sources of education, they could not make Indian parents and students entirely flip the switch on online education. However, while they waited for noteworthy academic results and positive word-of-mouth to develop, they strategically used a significant part of the USD 4.1 billion that was invested in this industry between 2010 and 2020 towards brand building and marketing. From roping-in Bollywood actors as brand ambassadors, to capturing advertisement spots between cricket matches, and purchasing sponsorship rights to the national cricket team’s jersey, EdTech organizations did everything possible to become household names, even in the country’s hinterland, and succeeded.

Covid-19 pandemic led the Indian government to announce closure of educational institutions across the country. What originally seemed like a small break from in-class lectures, quickly translated into a total breakdown of the traditional approach to education. As regulators, institutions & educators across the country struggled to use technology to revive educational processes, EdTech organizations – which were already household names, thanks to all the marketing and brand-building activities in previous years – found themselves in the limelight. Covid-19 had pressured Indian students and their parents to take to online education almost overnight, and the heat was now on EdTech organizations to not only serve these audiences effectively, but to also take advantage this opportunity and capture market share in other segments of Indian learners.

Following the above purchases, Byju’s and Unacademy, which originally dominated the K-12 and exam prep space respectively, found themselves operating across a sizeable number of other verticals, with each one experiencing an unparalleled surge in demand from Indian students and their parents. The situation is an organization’s dream as well as nightmare, and only time will tell whether these companies have been able to effectively consolidate, manage and leverage their acquisitions to occupy a bigger chunk of the market than before. While they’re pursuing their missions, other Indian EdTech unicorns such as UpGrad, Eruditus and Vedantu are slowly expanding their presence across verticals, with focus on providing a better educational experience to students and their parents, whilst waiting for the giants of India’s EdTech industry to make a slip-up so they can swoop-in to grab some market share.

The sudden emergence of India’s vernacular segment across every vertical of the EdTech industry is a matter of concern for all EdTech unicorns due to the sheer size of this segment, peculiarities associated with the audience, their own of lack of experience in serving this segment and the absence of sizeable EdTech players catering to this segment. The emergence of new-age technologies such as Augmented Reality (AR) and Virtual Reality (VR) in EdTech, as well as the recent popularity of short-length explainer videos is yet another aspect of concern for EdTech unicorns as one wouldn’t want to lose market share due to change in consumer preference for content. Even though consolidation in India’s EdTech industry started in 2020; with undercurrents as deep and wide as those mentioned above, it is safe to say that many more mergers and acquisitions are likely to happen during the coming 3 years.

On its end, the Centre has made it amply clear through its latest Union Budget that the government is keen on bridging the digital divide that has prohibited students reliant on India’s public education system from accessing supplementary tools of quality education during the Covid-19 pandemic. The government is taking a well-rounded approach to addressing this problem by facilitating development of physical infrastructure, platforms and regional-language educational content that will enable Bharat and India to walk together in the country’s path to progress. Even though the Covid-19 pandemic highlighted the need for supplementary modes of education – particularly those using technology – the government’s approach indicates technology playing a big role in public education even beyond Covid-19.

Bearing in mind the above developments, and the most recent spike in Covid-19 cases worldwide, we expect the continued rise of India’s EdTech industry in 2022. Only time will tell if the growth will match or exceed performance during the pandemic, however, one can be sure that it will certainly surpass pre-Covid levels.

Select the Right Subjects in High School Aligned with your College Majors
Regenerating Education by Leading from the Middle: A Reflection Checklist for Districts
Virtual Reality Based Education: Power of Metaverse
Language Eco-Tourism: The Beginning of a New Era
Working Towards A Hybrid Learning Future
Learn Green in Order to Go Green: India’s Students and Professionals Need Sustainability Education
CONTACT US