Comics as an Educational Tool 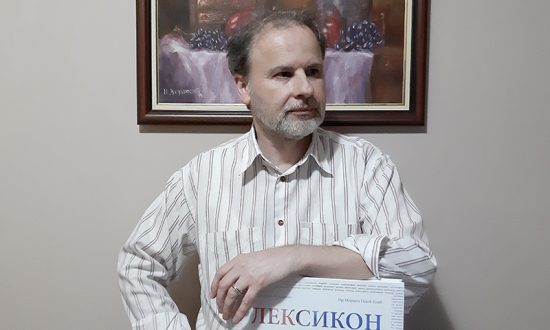 Miomir Dejanović draws comics, illustrations and employs them as teaching aids. Winner of the Development and Popularisation of Balkan Comics Award for 2017, 2018, 2019 and 2020, consecutively, he is declared as one of the best educators in Serbia. He has also won ‘Best teacher in the former Yugoslavia’. His rich work biography can be found in the Lexicon of creators in education that mark Serbian education. With his versatility and special approach to teaching, teacher Miomir Dejanović attracted the attention of the general public. In turn, many newspapers dealing with upbringing and education wrote about his work with students, and several television reports were made about him. He was featured on the website of the President of the Republic of Serbia, in ‘Best of Serbia’ category.

How long have you been in the teaching profession?

I have been hanging around with students as a teacher for twenty-five years, and that has enabled me to learn a lot about children from children. Of course, I also try to have children learn as much as possible from me too. I believe that I manage to be the kind of teacher I would like to have if I were a student – a teacher who is ready to rise to the level of a child and live in the same world with children. The job of a teacher unites most of my interests, it allows me to flourish. I like to write, draw educational comics and illustrations, to make short educational films, but also to pass on my interests to young people. Fortunately, what is interesting to me is in most cases interesting to the students as well. It is nice to work and talk with children because they raise topics that are much more interesting and cheerful than the topics that adults deal with. 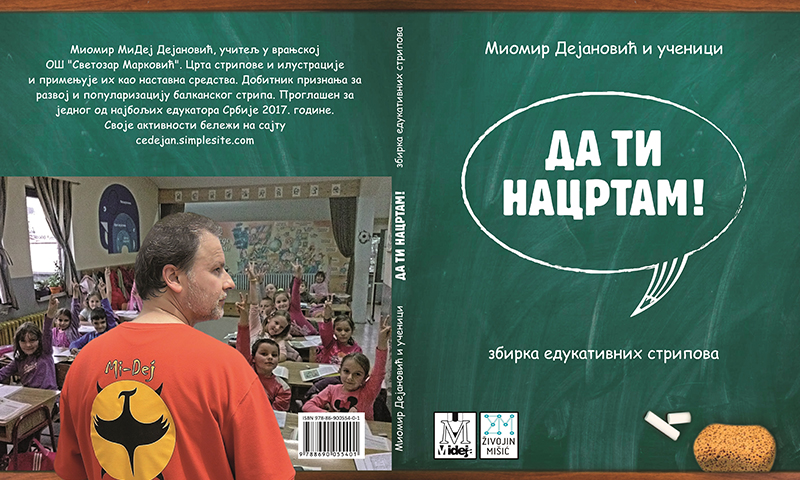 How did you come up with the idea to introduce comics in teaching as an alternative model of learning and adopting materials?

As a child, I was fascinated by comics. I started as an avid reader, but of course, over time, I wanted to draw something myself. My boyhood dream was for my comics to be published somewhere. That dream came true later, so almost everything I’ve drawn so far (both in terms of comics and in terms of illustrations) has been published in newspapers and magazines, so that children and adults alike can read those comics to my and – I hope – their satisfaction.

As soon as I became a teacher, I thought about how to pass on my love for comics to students and how to apply comics in teaching. It is known that children have a strong desire to create and it would be a great pity if this desire to express themselves through drawings is not used in a modern school. Curricula have been set, but the way in which I will approach their realization is not, so I choose the way—it depends on how I will bring the contents closer to the students. I like to convey important messages to children through comics and play because it is close to them and significantly increases their participation in the teaching process. Students remember the classes in which they participate, they enjoy them. 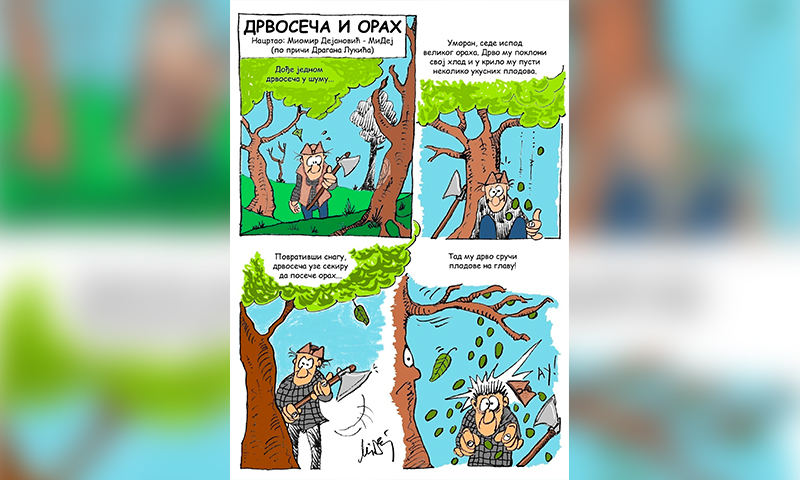 The comic in the classroom resembles a game, fun, but in fact, it enables the learning contents offered to be learned faster and remembered longer through a combination of text and drawings, in an effective and efficient way. We make comics with students in classes of native language, art culture, in classes of free activities, within comic workshops, on different topics: ecology, children’s rights, according to fairy tales, fables, based on texts by well-known children’s writers, or grammatical content that students learn much easier through comics than when they are taught in the classical, old-fashioned way.

Communicating information in the traditional way (oral presentation by teachers) is too uniform and dull for students. However, if we offer the same information through comics, children will adopt it much easier and keep it in their memory longer.

Comics enrich children in a fun way because precious life messages are unobtrusively conveyed through comics.

The use of comics and comic material in the school process also encourages creativity in students – over time, they illustrate and draw comics themselves based on what they have read. In this way, they enrich and refresh the teaching, because they create original teaching aids, which the teacher can use efficiently in his future work. 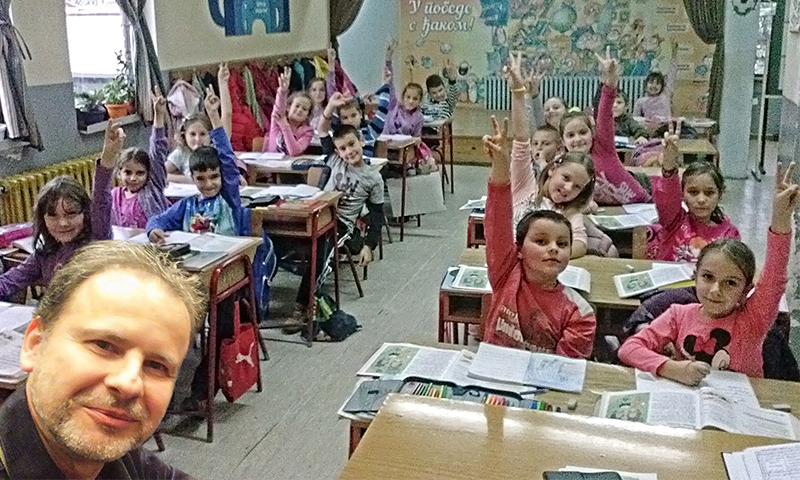 When I was declared one of the best educators in Serbia, I used the monetary part of the award to print a collection of children’s and my own educational comics, entitled ‘’Let me draw it out for you!’’. In this way, I found myself in the same book as my students. In the introductory part if this collection, I wrote about the wide range of possibilities of using comics and comic material in the teaching process and supported it with appropriate examples, followed by student and my coloured comics. The book also contains student comics what won first places at national and international art competitions, and some of them were exhibited at the 20th Balkan Festival of Young Comic Authors, among the works from authors from around the world. The collection ‘’Let me draw it out for you!’’ was created in teaching, but it is also intended for teaching, so I believe that it will serve as useful literature and as a teaching tool in working with future generations of students. In the desire for the book of educational comics to reach as many readers as possible, I gave copies to students, colleagues in Vranje and Serbia, the city library, libraries of schools, kindergartens.

I do not want to enrich myself, but the readers! Of course, comics are not almighty, but the effects of its application in teaching are undoubtedly great. It can be used in almost all subjects, and it has numerous and diverse effects on children. It does not require large investments, nor expensive technical devices in interpretation, but only the good will and talent of the cartoonist (talent is not crucial either, because it is possible to use other people’s suitable achievements). That is why we should try to get the comic out of the shadow of more expensive, but certainly not more powerful teaching aids as soon as possible.

What do you think about the digitalization of the education system?

Although I constantly follow modern trends and achieve notable results in the field of digitalization, I am still in favour of the moderate use of technology in teaching.

Modern technology, as a mediator between students and teachers, will never succeed in replacing the warmth of human contact and the beauty of the interaction of children and teachers in the classroom.

I think that the most important thing in teaching is the idea. An idea from the head of a creative teacher can overcome and outlive all technological wonders. My students and I give great contribution to the successes and promotion of our school and we are showing everyone that for top achievements, expensive teaching technology is not needed, only enough people with an idea, who use pencil and paper to create something valuable out of nothing. 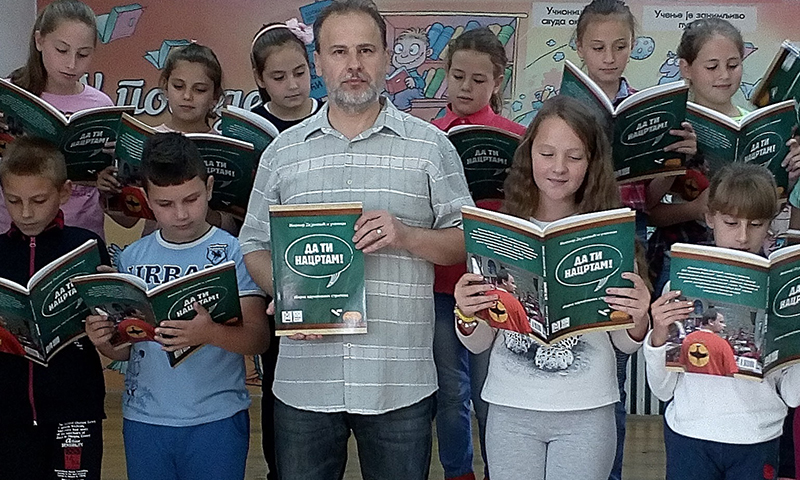 What are your plans for the future?

Creativity is the highest range of knowledge and that is why I will constantly encourage my students to create in the future, in order to experience the beauty of creation. Of course, I will motivate them by personal example. Without creative and versatile teachers, there are no versatile and creative students. A mentor is very important for every student, someone who encourages him and strengthens his will to persevere. In the beginning, I provide more significant help to students in their work—I lead them and ‘hold their hand’, but over time, they become independent and then I let them ‘walk alone’. Schools are full of talented students, you just need to discover them and work patiently to nurture and hone their talents.

So far, my students have won numerous first places in national and international competitions with comics, which I consider to be my success and recognition for successful mentoring work.

I tell children to work persistently and with love because only through love we do sublime deeds. In my opinion, art is everything that man creates out of love, and not out of greed. Money loses value over time anyway, and human deeds last!

Stereotypes and Women Representation in Education Sector
Can a humanities student aspire for the Ivy Leagues and a successful career?
Pedagogy of Twenty-First Century Innovative Teaching Methods
Extended Reality in Education: 5 Ways Augmented Reality will change the way we learn at school, at work, and in our personal lives
Vedantu launches SuperReaders- Phonics-based LIVE online reading classes for primary kids aged 4-6
What does the Education Sector have in Store for the Year 2021?
CONTACT US