Home /INDUSTRY PERSPECTIVE/Transmedia Education: A Proposal to Stimulate Curiosity and Participation in the Information Era

Transmedia Education: A Proposal to Stimulate Curiosity and Participation in the Information Era 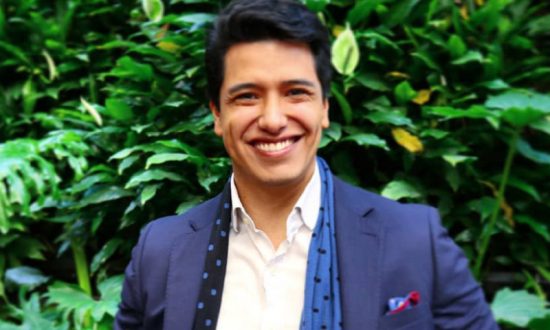 Sebastian Moreno is a social entrepreneur, CEO of Critertec Educación SAS, co-founder of Mett Colombia, member of “ANDI DEL FUTURO” and managing member of the EdTech Colombia guild. He is also a member of the board of directors of different non-profit organizations, such as “Techo para Colombia” and “Fundación Vida Nueva”. Sebastián has been the winner of different awards and incentives with his ventures in strategies such as APPS.CO and CREA DIGITAL (Colombian Government’s prizes). Sebastián has invested the last 6 years of his life in understanding how to improve the quality of education in Colombia and how to help students and teachers develop the necessary skills for the new economy and to contribute to the solution of the SDGs (Sustainable Development Goals) from their contexts.

Nowadays, we live immersed in an environment surrounded by multiple screens, devices, data flow and content that are constantly demanding our interest. Therefore, deciding what to pay attention to, becomes a common and demanding task. We know that since the advent of the computer, video games and the Internet, the ways of communicating, consuming, entertaining and inhabiting the world have changed; or in the words of the American writer Bruce Sterling in The dead media manifesto (1995-2001), our culture is experiencing a great wave of new media species. Centralized media, those one-to-many dinosaurs that roared and stomped on the earth during the 20th century, do not adapt well to the postmodern technological environment.

Similarly, in 2003, Henry Jenkins, an American researcher at the University of Southern California, in an article published in the Technology Review Magazine, stated that we have entered a new era of media convergence that makes the flow of content through multiple channels inevitable, proposing the concept of transmedia narratives which, in its most basic expression, means telling stories through multiple media. In this article Jenkins states that children who have grown up consuming and enjoying stories such as Pokémon, Star Wars or Harry Potter, among others, (…) are looking for stories and experiences anywhere that generate emotion using multiple media, such as: movies, workshops, podcasts, board games, video games, books, etc. Likewise, communication scholars such as the Argentinian Carlos Scolari (2013) affirm that young consumers have become hunters and gatherers of information, they like to immerse themselves in these stories, reconstruct the character´s past and connect them to other texts within the same franchise (e.g., Pixar), which has led to new forms of participation and interaction among story fans. 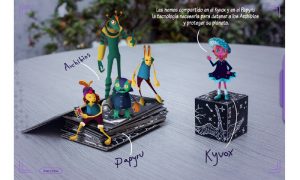 Ultimately, the concept of transmedia narratives consists of telling a story or communicating a message through multiple media, each one with their own independent content, but still related to each other, offering the audience different entry points to a real or fictional narrative universe. The above, to promote the consolidation of a fan community motivated to participate and create in a collaboratively way, new content that enables them to propose other points of view from the original story, based in their own interests and skills. Which teacher does not dream of classes where the pedagogical content has the same success? What would happen if we proposed an education based on the logic of transmedia narratives?

Since 2017, as a private company we have put our efforts in designing with an interdisciplinary team, high impact educational projects and exciting learning experiences from the integration of disruptive methodologies and approaches (such as gamification, user experience, Design Thinking, STEAM and transmedia narratives), as well as emerging technologies, in order to inspire children, youth, teachers and families to become agents of change and social transformation. As a result, we generate a Transmedia Education approach that allows us to integrate learning objectives with narratives, gaming and media, to create learning experiences that stimulate curiosity and creativity, promoting audience participation through the creation and dissemination of content. 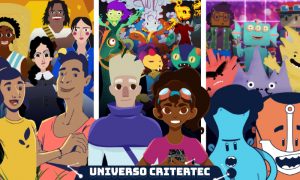 A clear example of the results that can be achieved with this approach is our transmedia pedagogical project GUARDIANES (“keepers”), aimed at children and youngsters between 6 and 14 years old, educational agents and families. Based on a science fiction narrative, but using real scientific facts, it invites them to investigate, experiment and understand their world from different disciplines, making a conscious use of technologies and devices, in order to enhance 21st century skills and propose solutions to the problems we face as humanity. In this story they are invited to counteract an interdimensional threat, related to villains known as the Archibios, capable of manipulating human beings from the shadows to generate irrational behaviours and ultimately put society and the world as we know it at risk (see official trailer).

In GUARDIANES, media allows the audience to revaluate their role in the world and transmit messages that invites then to rethink human behaviours and activities in order to contribute to the protection of the environment and improve the quality of life of all beings on planet Earth. This is how this story, which unfolds through multiple media, can provide a memorable experience, stimulating both curiosity and audience active engagement.

The central conflict of this story is related to some interspace villains known as the Archibians, capable of manipulating humans into destroying their own world. They were brought to humanity´s attention by two space artifacts (Kyvox and Papyru) sent to Earth by a more advanced civilization inhabiting planet Kepler 452B, who located us in the Cosmos thanks to the Voyageur 1 probe sent by NASA in the 1970´s.

These artifacts were found by an astronaut from the Interspace Technology Agency (ITA), a secret organization that has been operating in the heart of Colombia for more than 14 years under the leadership of Dr. Rodolfo Trujillo, a renowned scientist and astrobiologist with extensive knowledge of molecular engineering. He and his team use Augmented Reality technology to decipher extra-terrestrial messages and discover that the Archibios greatly affect adults. For this reason, he creates the GUARDIANES initiative, and makes available to children and youngsters technology much needed to counter the threat and protect planet Earth. 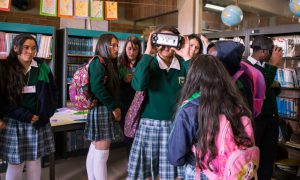 During the course of the story, children and young people will discover that the Archibios are, in fact, beings from other planets that have been parasitized by an ancestral fungus (cordyceps unilateralis) that modifies the behaviour of whoever it chooses as it´s host. These villains will be in charge of presenting to the audience a series of conflicts related to the havoc they have caused in the universe, so that the participants can solve them collaboratively, through research, experimentation and creation processes.

The central conflict is what allows us to propose different stories interrelated with their respective media, to offer children and young people various options to enter the narrative universe where we will bring them closer to learning objectives and specific values that we want to integrate into everyday life.

With the purpose of expanding the story of Guardianes Project, we created twelve (12) media products, for both on-site and virtual usage, which contribute to the generation of meaningful and immersive experiences that transcend the physical space of the classroom to build and appropriate knowledge collectively. These media products are: face-to-face workshops, animated video, mobile applications, English camp, card games, social networks, missions and tutorials, comics, a pedagogical guide for parents and teachers, diegetic objects (Kyvox and Papyru), oficial ATI application and a website.

Each one of the media products above, allows the audience to learn a part of the story and opens the possibility of formulating questions and theorize about the origins of the Archibios and their possible involvement in some of the current global issues. For example, in the English camp designed for students from 10 to 13 years old in the city of Medellín, Colombia, our pedagogical objective was to inspire participants to speak as long as possible in English, while playing and solving puzzles. What kind of story and conflict could we create by relating these objectives to the narrative universe of the project?

We decided to put in trouble the director of ATI, Rodolfo Trujillo, who after investigating about pollution in some cities of the world, discovers that the Archibios have a plan to pollute the air of Medellín. However, it seems that they find about his research, so he decides to go into hiding before the Archibios catch him. The mission of the participants will be to analyse the last reports sent by Rodolfo Trujillo to the ATI before he vanished, in the best classic Carmen Sandiego game style. They will have to prepare their passports, visit several countries through a virtual reality application and, most importantly, communicate in English all the time, since the Archibios do not know this language and they could be interfering with tablets and other devices we are using. 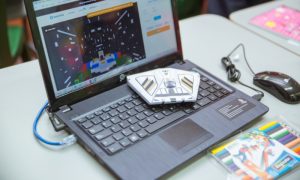 The most interesting thing about weaving the learning objectives with real data and science fiction stories, is the possibility of activating the senses and attention, stimulating creative and critical thinking of the participants to discern which parts of the story are fiction or reality. During this experience we saw groups of teens sitting on a pile of cushions, carefully hiding the tablets that have been assigned to them to read the Papyru augmented reality clues. Why? They were convinced that speaking English was not enough to avoid being spied on. Even one of the participants from another group comes up to us and asks while pointing to the floor: do you see that? Our reaction was to hold up a crumpled piece of paper, to which he replies: I see you are not a an Archibio! Then joins his group to tell them the area has been secured, so they can carry on.

These type of exciting experiences in transmedia projects motivate the audience to look for answers to questions that have not yet been resolved; to do so, they explore other media that make part of the project, and take from the story certain behaviours, attitudes, methods, that they will bring into their own lives and integrate into their culture.

In conclusion, with an interesting story, multiple media and the application of the principles of gamification, it is possible to design more humane experiences that captivate the attention and engage people to participate and collaborate with each other to solve everyday challenges; but also dream of other possible futures, especially in a context where as of January 2022, 62.5% of the world´s population has their attention in a sea of information on the Internet (Datareportal, 2022), and now have the possibility of choosing what, how, when, and where they want to consume information, making a future for themselves as they go.

Select the Right Subjects in High School Aligned with your College Majors
Regenerating Education by Leading from the Middle: A Reflection Checklist for Districts
Virtual Reality Based Education: Power of Metaverse
Language Eco-Tourism: The Beginning of a New Era
Educational Innovation for Rural Areas Through the “Aulas AMiGAS” Model
Scaling Computational Thinking and Coding in Schools in Latin America
CONTACT US