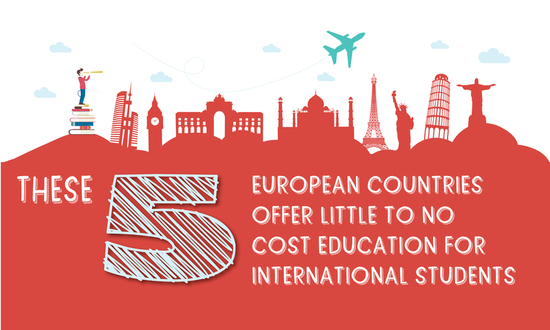 When we think about Europe as our higher education destination, the first county that comes to our mind is the United Kingdome. Getting into universities like Oxford and Cambridge have always been a dream for every Indian student aspiring to go abroad. However, considering the cost of study and difficulty of getting admission in the premier UK Universities, the dreams remain as dreams for most of us.  Fortunately, European countries such as Norway, Sweden, Germany, Denmark, Finland and many more hosts excellent universities that offer tuition free education international students.

One of the three Scandinavian countries, Norway has been ranked among the top places to live in by the United Nation’s Human Development Reports. This annual ranking is based largely on average levels of education and income, combined with life expectancy, but also factors such as human rights and cultural freedom. Among its 5.2 million population, a large number are immigrants or Norwegian-born to immigrant parents. International students along with native students can enjoy a free ride at state universities, as the Norwegian government finances education with taxpayers’ money. The University of Oslo, University of Bergen, University of Stavanger, Norwegian University of Life Sciences (UMB), University of Agder (UiA) and the University of Nordland are some of the tuition free universities that this Scandinavian country boasts of.

With 85 percent of its population live in cities and 2 million out of 10 million people fall under the age of 18, Sweden is a vibrant county for international students to study. Interestingly, 15 per cent of Swedes were born in another country, while about one in five children in Sweden has a family with roots in another country, making it a very multicultural country. However, tuition free education is a history for International students who opt Sweden. In 2010, the Swedish parliament passed a law to charge tuition and application fees for non-EU/EEA students. At the same time, many institutions offer full scholarships and tuition waivers for international students. Lund University, Halmstad University, Uppsala University, Stockholm University, Stockholm School of Economics and Jonkoping University are some of the prominent institutions in this category.

The country of poets and thinkers, Germany is undoubtedly one of the major destinations for higher education in Europe. World-class education, exciting urban life embedded in beautiful landscapes, and a welcoming culture with people from all over the globe are factors that define a student’s life in Germany. Though, there is nothing wrong in spending some good fortune to get German education, the country has many institutions that offer world-class education free of cost. Yes, no matter where you come from, education is free in this country. Living costs in Germany are relatively modest when compared to other Western European nations. On average, students can get by on 800 euros per month.

If you are lover of sandy beaches, then Demark is the country where you can pack your bags to. Nowhere in Denmark is more than 50 km from the sea. And just a few kilometres from Denmark’s major cities of Aarhus and Copenhagen you find idyllic villages and pristine woodlands and lakes. At the same time, whatever subject you choose to study in Denmark, you can expect outstanding quality. Danish higher education combines traditional academic excellence with teaching that will make you think experiment and collaborate your way to greater knowledge. Although, tuition free education is only available of EU/EEA students, the cost of studying is comparatively very less in Denmark.

As Indians, we are accustomed to various light shows. During the time of Diwali, we see colors burst into the air. But, those are manmade. Have you ever experienced the nature’s spectacular light show, the northern lights? Apparently, the northern lights are visible roughly 200 nights a year or every other clear night – in Finnish Lapland. That is not the exact reason why you should choose Finland for your international education. Finland’s world-leading higher education system offers English-taught bachelor’s and master’s degree programmes in 14 universities and 23 universities of applied sciences. Finnish higher education institutions offer over 400 different study programmes and have over 20000 international students studying in several locations around Finland. Until 2017, Finland’s education was free, but still scholarships are available for international students. Exchange students also would get enough financial benefits in Finland.

5 Predictions for Education Following COVID-19
What is HumaneMaths?
Brewing a New Albania Through Education
STEAM- An Educational Framework to Relate Things To Each Other And Reality
Know these 5 Facts Before Choosing Singapore as Your Higher Education Destination