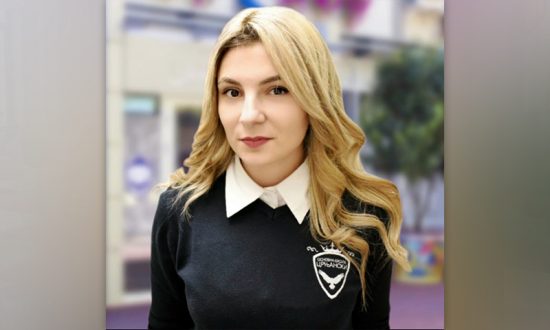 With her creativity and digital skills, Aleksandra Filipovic has successfully adapted her teaching practice to the capacities of her students, encouraging them to work in a stimulating environment based on the principles of modern teaching. Inspired by the benefits of digital technology in education, and the biographies of her country’s greatest figures, she created interdisciplinary websites to transform abstract content into engaging STEAM adventures, thus encouraging students to independence, research, logical reasoning and teamwork. Her classroom is often transformed into a variety of different learning environments, and she insists on innovative teaching models, such as problem-based instruction, programmed, exemplary and differentiated instruction, as well as didactic tools that help students to embark on daring virtual adventures. She translated her ideas about the integration of seemingly incompatible content into several handbooks for integrative teaching, published by Eduka.  She also started a blog “The roots of learning may be bitter, but its fruits are sweet”, whose title reflects her professional motto. Aleksandra’s readiness for innovation and implementation of different methods of active learning have been recognised by the most renowned educational experts, which is why she is the winner of numerous awards and accolades in the field of education, which also motivates her students to utilize their talents in different contests and competitions.

Effective education is guided by changes that encourage students to develop problem-solving skills and deal with the consequences of the potential outcomes of their efforts. Inspired by the words of Pupin’s mother, which were the main motto of the project, “Knowledge – a golden ladder that takes us to heaven“, I implemented a project with the 3rd grade students of the international school that represents an unusual adventure through life and work. It grew from many inspirations and proved to be the best guide for further progress in order to overcome seemingly impossible obstacles, taking advantage of working conditions in a modern school and the stimulating learning environment. It features digitalisation of the STEAM project based on the prior theoretical research of the life and work of the famous Serbian scientist,  Michael Pupin, which was, due to the heterogeneous structure of the class, implemented bilingually: in Serbian and English.

The project was guided by the principle of the 4C STEAM concept, which includes the four key skills for 21st-century education: creativity, collaboration, critical thinking and communication. It implies an interdisciplinary approach to the areas that were the center of interest of the fearless scientist in order to better understand his life path along the line “from pasture to scientist”. The main feature of the project is the independent work of students on the author’s Wix site “Improvised Pupin’s Creations”, which is a kind of treasure trove of e-tools incorporated into the site to facilitate student navigation, which is one of the important prerequisites for successful work of students of this age. 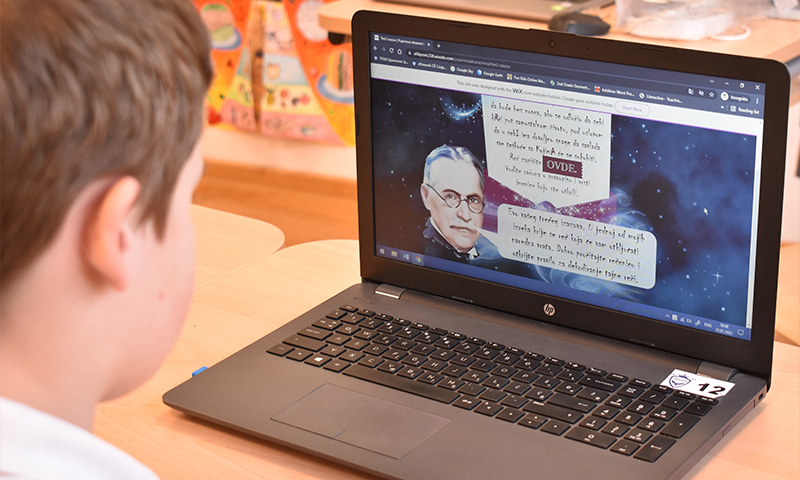 Golden ladder to the knowledge by using EdTech

Working on virtual stations, students get acquainted with interesting things from Pupin’s life through logic tasks and the concept of questions in the form of Escape room, and encourage independence and perseverance in work. Each station has a symbolic name and deals with special periods of this great man’s life. The tasks to be solved before entering each station are diverse. What connects them all is the obligatory observance of spelling rules when entering potential solutions.

The station “Idvor roots” points out to the importance of Pupin’s curiosity for his further progress. By reading selected excerpts from the autobiography “From Immigrant to Inventor“, they get acquainted with the period of Michael Pupin’s childhood. Selected passages serve as a project “anchor”, which introduces the project and inspires students to show further interest.

Following the “Trace of Curiosity”, as the next virtual station is called, the students, using Polybius Square and following the given guidelines, receive instructions on how to simulate Pupin’s famous childhood game to determine the direction of sound movement. Further interest of students in researching the topic of sound is aroused through the practical performance of the experiment: “Does a pencil have a heart that beats”, “Let’s SEE the sound” and “Sound art”. The survey is preceded by assumptions about what will happen in order to develop hypothetical thinking.

“The Great World” station opens by decoding the word AMERICA, which is hidden in the form of anagrams in Pupin’s famous thought, “It is not unfortunate for a young man to be without money at all, if he decides to pave the way to independent living, provided he has enough strength to overcome all the difficulties he will face”. This sentence depicts the content of this virtual station, which aims to acquaint students with the problems that Pupin faced with an emphasis on language barriers and his perseverance, which enabled him to become an excellent connoisseur of not only English but also Latin and Greek. 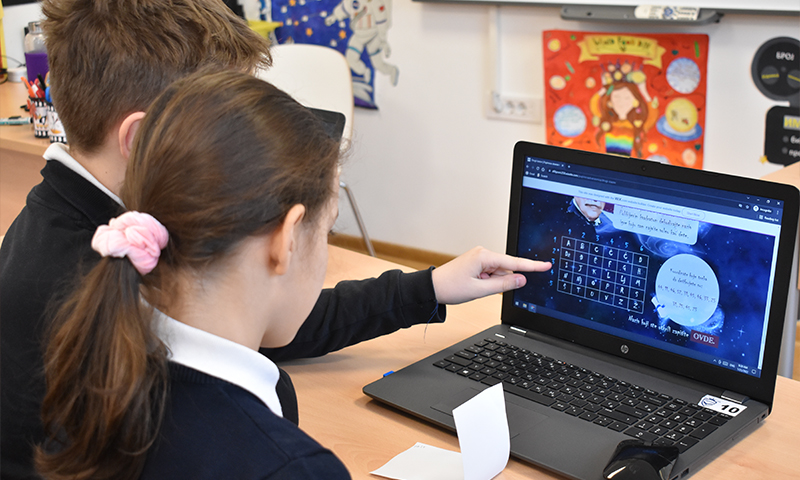 “Master of electrical inventions”, as Crnjanski, who our school is proudly named after, once called Pupin, is the name of the station that students approach by decoding the word SCIENTIST and as a reward they get the opportunity to try themselves in the role of scientists exploring light, stars and electricity – three large areas that were the center of interest of Michael Pupin.

The “Scientists’ Club” marked longitudinal research in order to examine the degree of mastery of knowledge about the life and work of Nikola Tesla, acquired in the last year’s class project “Tesla’s Fairy Tale”, which was organised in a similar way. In order to draw a parallel while emphasising the distinctive differences of two brilliant minds, the students must use previous experiences and bring them into a new context. As one of the highest levels of Bloom’s Taxonomy in this section, students are given a task of a creative nature, which involves applying knowledge about the life and work of these greats by designing their conversation while working in Scratch.

The last station “Homeland at Heart” is determined by the contents about the ways in which the legacy of Michael Pupin is cherished in his homeland today and the possibility of a virtual visit to his museum in Belgrade. At this station, special emphasis is placed on the development of creative thinking and creative work of students through writing a postcard to the mother from Pupin’s angle, using the available online tools. A short empirical research is being conducted in order to examine the level of familiarity of 5th and 6th grade students with the life and work of Michael Pupin.

Pupin’s curiosity in the STEAM environment

Entering the world of astronomy and physics was accompanied by students’ practical work on the independent performance of experiments and continuous encouragement of hypothetical and inductive thinking of students. Using the Phet simulation of perceiving different colors, students embark on a virtual expedition that helps them see that the set of all the rainbow colors our eyes perceive as white.

Their stay in the star kingdom was inspired by Pupin’s need to enjoy the beautiful celestial scene of summer nights in his native Banat, which he describes as stark opposites: “the stars are unusually bright, and the sky, on the contrary, is black”. Students at this station gain knowledge about the types of constellations and their characteristics. They have the possibility of a virtual visit to the planetarium and making an improvised constellation projector with the help of materials from the immediate environment. 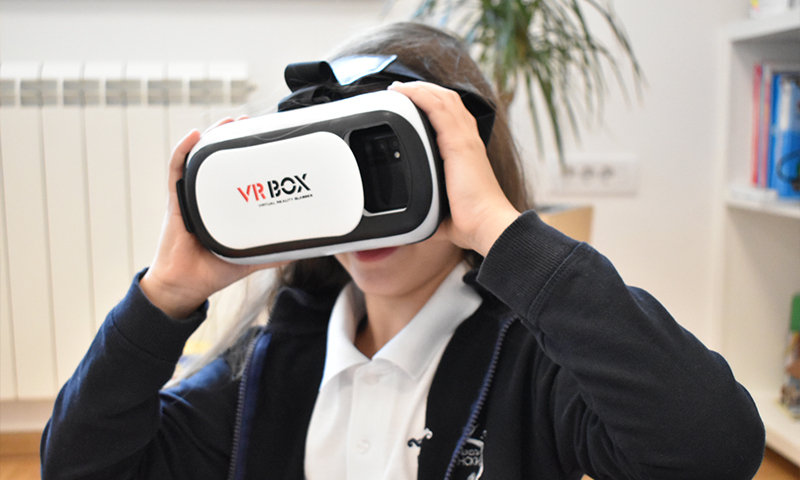 As a form of motivation for further work, the students after this step learn that Pupin’s interest in the mentioned areas helped him make an invention that facilitated long-distance communication. In order to encourage creative thinking and apply the acquired knowledge, they are given an additional creative task to describe what it would look like just one day today in their family or neighborhood that there is no possibility of communication at long distances.

By processing the collected data, it was established that 5th and 6th grade students know the data about Pupin’s creative work and recognise his inventions, but need to improve their understanding of Pupin’s childhood and leading role models, who helped him find his way through. This provided a basis for a joint effort to draw up and deliver a public presentation, in front of all students of the school, which was symbolically staged on Saint Sava’s Day (Saint Sava is a school patron). The symbolism draws on Pupin’s quest for knowledge which began on the very date, when he showed his skills in front of a packed court hall and delighted everyone with his speech.

“Pupinmeter” in the function of work evaluation

The final stage of the project included the evaluation of the work using the Likert scale in a digital form. Students first expressed their views on the self-assessment within the project through a five-point numerical scale, and the results showed that students have improved in reading comprehension, public speaking, working on various tools, are able to list at least five interesting facts about life and the work of Mihael Pupin, and make a comparison with the life and work of Nikola Tesla. The evaluation of the success of the organisation and implementation of the project by the students was performed using a five-point descriptive scale, where the results showed that the choice of tasks and tools was appropriate, and the instructions for work were clear and precise.

The same scale was used for teacher assessment. Analysing each segment of work and coordinating the work of my students, I noticed the possibility of teamwork and joint work as the greatest advantage, while complementing each other by using their strengths. Insisting on following the guidelines resulted in partial drawing of conclusions, where each student is able to explain in their own words what was done in a specific stage of the project and critically review their progress within it.